Most popular flowers sent to Johnshaven, Aberdeenshire this month 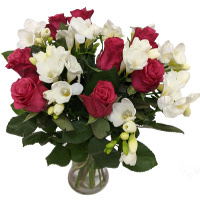 It's easy to miss Johnshaven if you're driving to Fife or Stonehaven on the A92. There are signposts that indicate its presence and the village itself can be easily seen from the road but, due to its small size, you'll probably just zoom past it. There's nothing wrong with this but, if you're looking for a place where you can spend a relaxing weekend getaway or even just a few hours of quiet, you'll want to stop by the village and enjoy what it has to offer.

No one's really sure how the village got its name, although there is evidence that people have been living in the area since the Stone Age. Archaeological experts believe that the village and its layout were founded in the middle of the 1500s, but it started to get mentioned a couple of centuries later.

Johnshaven grew mainly as a fishing village. In the 1722, it was recorded to have 13 large boats (which had 10 crew members each and sailed during summer for distant cod fishing) and 13 smaller boats (which had 8 crew members each and were used throughout the year). Almost 80 years later, the area had a population of around 1,000 people, and it had its own school and inn as well as manufacturing establishments that produced sailcloth and other items.

The village continued to experience economic development throughout the 1800s, although this growth slowed down during the later part of the 20th century, when the fishing industry started to decline.

Johnshaven has retained its character as a fishing village. Although many of its residents have taken jobs in nearby towns and cities, there are still those who continue to fish or catch crabs and lobsters for a living. Because of this, boats are still a part of the village landscape (they even outnumber cars), and it's not strange to see oilskins and fishermen's boots drying outside cottages.

Johnshaven has been designated by the Aberdeenshire Council as a Conservation Area, which means that its buildings and other spaces are considered to have historical and architectural importance. So, while you're in the village, take a stroll through its streets to see its centuries-old properties and admire gardens that are bursting with Johnshaven flowers. You can also check out the historical structures in the area, such as the former flax mill, the ruined chapel, and the old school house. Don't forget to walk along the harbour to look at the boats, observe the fishermen going about their day, and breathe in the fresh, salty breeze.

If you time your visit right, you might be able to join the Johnshaven Annual Fish Festival, which takes place during the first two weeks of August and celebrates the village's fishing roots. You might also catch the Flower Show and the Hortis Society Annual Plant Sale, both of which are hosted by the Benholm and Johnshaven Horticultural Society and feature plants and flowers in Johnshaven.

Visiting the village with your loved ones? Why not send flowers to Johnshaven? As an online florist, we can provide you with a wide range of bouquets to choose from and even help you select the right design. With our assistance, you can surprise your mum with a bunch of her favourite flowers during Mother's Day or delight your wife with a bouquet of roses during your wedding anniversary.

Our flowers delivery services in Johnshaven, Aberdeenshire are usually made by DPD or Royal Mail Special Delivery. 99.9% of our flowers are delivered by 5pm on the requested day - (more commonly before noon), except UK Public Holidays. We also offer a range of next-day flower delivery options in Johnshaven, Aberdeenshire - specific information is available during checkout.