Our florists love making bouquets and arrangements for UK flower delivery, and we can send flowers to Peterhead, Aberdeenshire for you. We have a wide range of Roses, Freesia flower bouquets, and Lilies, as well as Classic Bouquets and our Colourful flower Bouquets, and our range of Flowers under £21.00. Our home page provides more information on our extensive range of next-day flower delivery services, all of which are available for next day UK flower delivery to Peterhead, Aberdeenshire, Or indeed anywhere in the UK! When you're thinking of a gift to give on birthdays, anniversaries, Mother's Day, Valentine's Day and other occasions, why not send flowers to Peterhead, Aberdeenshire? Through us, you can choose from a variety of bouquets to those close to your heart. We also offer next-day delivery service in case you want your blooms to arrive right on schedule. So if you want flowers delivered on special occasions, make sure to order flowers for delivery to Peterhead, Aberdeenshire. Best of all, our seven day freshness guarantee means you can rest assured knowing your special someone will enjoy their flowers for days after delivery.

Most popular flowers sent to Peterhead, Aberdeenshire this month 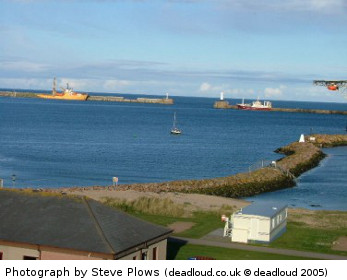 Known as the biggest settlement in Aberdeenshire to date, Peterhead is also Scotland's easternmost point. Colloquially known as the Blue Toon with inhabitants referred to as Blue Tooners, the town was originally a fishing port and became a major service centre for the oil industry by the 1970s.

Whilst it enjoyed a brief spell as a spa resort in the 1800's, it is its harbour facilities that have stood the test of time. Nowadays, its port is home to a mix of fishing, oil and gas and leisure vessels. The Peterhead Maritime Museum is dedicated to depicting this history and the town remains known today for being the largest European white fish port. It also has a well-regarded modern fish market.

Peterhead can be found approximately 30 miles to the north of Aberdeen and is accessed via the A90. It has a traditional retail and commercial centre with a range of shops, restaurants, bars and cafes. One can visit Scotland's oldest salmon fish house, browse in well-known chain stores or small independent shops or send flowers to Peterhead from the town centre.

The perfect present for your friends in Peterhead

Aberdeenshire's historic past can also be found here. The ruins of Inverugie Castle, also known as Cheyne's Tower, can be found some two miles from the town. The site dates back to the 12th century when a motte-and-bailey structure was located here. The ruins of Slains Castle can also be seen in nearby Cruden Bay. This 16th century castle is reputed to be the inspiration for Bram Stoker's Dracula.

Other attractions in the area include the Aberdeenshire Family Museum and Working Farm at Aden, the Caringorms National Park and the Loch of Strathbeg, a RSPB Reserve. The town is also popular with golfers as the world's 18th oldest golf course is located here whilst the traditional Cruden Bay Links is also within easy reach.

Our flowers delivery services in Peterhead, Aberdeenshire are usually made by DPD or Royal Mail Special Delivery. 99.9% of our flowers are delivered by 5pm on the requested day - (more commonly before noon), except UK Public Holidays. We also offer a range of next-day flower delivery options in Peterhead, Aberdeenshire - specific information is available during checkout.