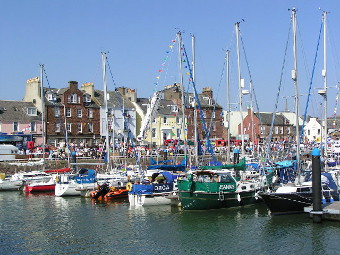 Flower delivery to Arbroath - give the gift of flowers!

Arbroath is a popular Scottish destination lying on the eastern coast of Scotland. Situated close to the city of Dundee and within travelling distance of Aberdeen, Arbroath is a picturesque fishing town which draws many tourists each year.

Visitors can spend some time on the beaches and bathing in the sea during the warm summer months. The striking red cliffs are also appealing to those wanting to explore caves in the area including Dickmont's Den and the Forbidden Cave. There is also a lighthouse which can be seen from miles around.

In contrast with the natural flora and fauna along the coastline, the town is built around what remains of Arbroath Abbey. Constructed in 1178, the Abbey was the historic setting for the signing of the Declaration of Arbroath. The declaration outlined the proposal for Scottish independence. Both the Abbey and the cliffs are constructed from local red sandstone which is what is responsible for the red hues in both.

Your friend in Arbroath will love their flower delivery!

Fishing is still at the heart of life in Arbroath and is it an important location for processing fish. Arbroath is most famous for its version of smoked haddock, known as Arbroath Smokies. Much of the local economy is sustained through tourism. There are many holiday parks in the area to accommodate visitors all year round. With this come plenty of open space, landscaping and parkland.

Locally, there is an abundance of gardens open to the public including Pitmuies Gardens, St Andrews Botanic Gardens and Kellie Castle and Garden. Here you will find formal landscaping such as lawns and shrubs in amongst flowering perennials and herb borders.

The best option for flower delivery to Arbroath is to order online from Clare Florist: our free next-day delivery is a trusted way to get beautiful flowers, carefully packed by florists who love flowers every bit as much as you do, delivered to any address in Arbroath or the surrounding areas.

Most popular flowers sent to Arbroath, Angus this month

Our florists love making bouquets and arrangements for UK flower delivery, and we can send flowers to Arbroath, Angus for you. We have a wide range of Roses, Freesia flower bouquets, and Lilies, as well as Classic Bouquets and our Colourful flower Bouquets, and our range of Flowers under £21.00. Our home page provides more information on our extensive range of next-day flower delivery services, all of which are available for next day UK flower delivery to Arbroath, Angus, Or indeed anywhere in the UK! When you're thinking of a gift to give on birthdays, anniversaries, Mother's Day, Valentine's Day and other occasions, why not send flowers to Arbroath, Angus? Through us, you can choose from a variety of bouquets to those close to your heart. We also offer next-day delivery service in case you want your blooms to arrive right on schedule. So if you want flowers delivered on special occasions, make sure to order flowers for delivery to Arbroath, Angus. Best of all, our seven day freshness guarantee means you can rest assured knowing your special someone will enjoy their flowers for days after delivery.

Our flowers delivery services in Arbroath, Angus are usually made by DPD or Royal Mail Special Delivery. 99.9% of our flowers are delivered by 5pm on the requested day - (more commonly before noon), except UK Public Holidays. We also offer a range of next-day flower delivery options in Arbroath, Angus - specific information is available during checkout.