Most popular flowers sent to Rosneath, Argyll And Bute this month 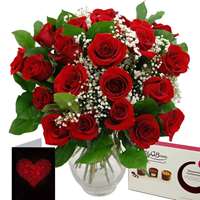 Rosneath is a peaceful holiday resort and a popular tourist destination for a variety of watersport activities. Lovers of walled gardens will enjoy the range of Rosneath flowers in Glenarn Gardens, Hermitage Park and the Linn Botanic Gardens. Thanks to the warmth of the Gulf Stream, the Rosneath Peninsula is an ideal place to grow different kinds of exotic plants.

After seeing a range of flowers in Rosneath as well as taking part in a series of water-based activities, the village offers various kinds of accommodation, including hotels and self-catering holiday parks. So if you're on a romantic holiday and would want to send flowers to Rosneath to surprise your date, that's very much possible. Additionally, there are local shops and cafes in and around the village when you want to buy some items or grab a bite to eat.

A travelling missionary called St Modan founded a church in Rosneath about 600, and since then the village has been settled. Later on, the area was fortified with Rosneath joining nearby Faslane and Shandon. By this time, the village was not yet complete, it was just comprised of free-standing dwellings.

Rosneath Castle has had a history of being ruind and rebuit so many times. The final rebuilding came in 1803 which was three years after the previous one burned down. The castle belonged to the Duke of Argyll and his family retained it until the death of Princess Louise, Duchess of Argyll, in 1939. Rosneath Castle is unlike other earlier castles as it's built in Romanesque style. It was demolished in 1963.

Rosneath was an important naval base from 1941 to 1945. It's location in the well-sheltered natural harbour of the Gare Loch made it so.

The Rosneath Peninsula used to belong to the County of Dunbarton, but local government reorganisation moved it to Argyll and Bute. It's been part of the council area since 1996.

Glenarn Gardens – a private garden that rose to fame for its collection of rhododendron species.

Hermitage Park – the only urban park in Argyll and Bute. Use of the park hasn't been as frequent as years past and there are plans to redevelop the whole park to restore its significant heritage.

Linn Botanic Gardens – a woodland garden that is run in conjunction with a nursery. Here, you're afforded lovely views of The Firth of Clyde and Loch Long. Also, you'll find a bamboo garden, rockery, fountains and a collection of ferns in the gardens.

Sending someone a bouquet during a special moment in their life is one of the most touching gestures you can do. So when you have a friend or family member from town who is celebrating a momentous event in their life, why not send flowers to Rosneath to them? We can help you out with that with our collection of floral arrangements perfect for anniversaries, birthdays, Mother's Day, Valentine's Day and just about any other occasion. Also, we offer next-day delivery when you order flowers for delivery to Rosneath from us.

Our flowers delivery services in Rosneath, Argyll And Bute are usually made by DPD or Royal Mail Special Delivery. 99.9% of our flowers are delivered by 5pm on the requested day - (more commonly before noon), except UK Public Holidays. We also offer a range of next-day flower delivery options in Rosneath, Argyll And Bute - specific information is available during checkout.