Most popular flowers sent to Hambleden, Buckinghamshire this month 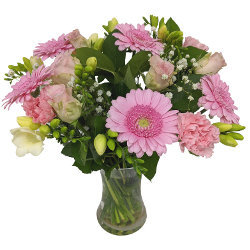 The village of Hambleden is a civil parish located in Buckinghamshire, England. It lies within the Wycombe district of the county and is just four miles away from the town of Marlow. The civil parish of Hambleden also includes the villages of Frieth and Fingest, and the hamlets of Skirmett, Parmoor, Mill End, Colstrope, Moor End, and Pheasant’s Hill. The name “Hambleden” is an Old English word that means an unevenly-shaped hill. There was even mention of this village in the Domesday Book of 1086 which recorded it under the name “Hanbledene.” Before then, the village was known to the locals by the name “Hamelan dene.”

There are a lot of old buildings in the village that date back for centuries. If you go to the village centre you’ll find cottages made of flint and brick which date back at least a few hundred years. They were all designed in a similar way with red tiles and dormer windows. In the 14th century, St Mary’s Church was built in Hambleden. You can find a memorial on the property dedicated to Cope D’Oyley’s passing in 1633. Next to the church is an Elizabethan manor house from 1603 that was also built out of flint and brick. It’s had numerous owners over the years including the Earl of Sunderland and Lord Cardigan.

The most fascinating thing about Hambleden is remains from the Roman Empire that were discovered in 1912. Some historians and archaeologists believe that the remains may have been from a Roman brothel which could have existed on the land of Hambleden. This conclusion was made after the skeletal remains of almost one hundred newborn babies were discovered there in 2010.

If you come to Hambleden with your romantic partner then you will find plenty of fascinating historical sites to visit. At Mill End, you’ll find a villa and watermill which are considered to be landmarks of the civil parish. The Mill House is an ordinary home adjacent to a series of converted barns. There is even a Roman villa called Thameside in the eastern part of the area as well. But if you are a movie fan then you’ll want to visit Hambleden’s Lime Tree Valley because this was the location where “Sleepy Hollow” was filmed, which starred Johnny Depp.

Before you come to the village, you may want to order flowers for delivery to Hambleden in order to make it a more special occasion for your loved one. You can go to clareflorist.co.uk and choose from many different flower arrangements that cater to all kinds of occasions. After your order is placed, we will send flowers to Hambleden within 24 hours. Then you can enjoy the look on your partner’s face when she receives these beautiful flowers that she was never expecting to get.

Our flowers delivery services in Hambleden, Buckinghamshire are usually made by DPD or Royal Mail Special Delivery. 99.9% of our flowers are delivered by 5pm on the requested day - (more commonly before noon), except UK Public Holidays. We also offer a range of next-day flower delivery options in Hambleden, Buckinghamshire - specific information is available during checkout.