Our florists love making bouquets and arrangements for UK flower delivery, and we can send flowers to Wing, Buckinghamshire for you. We have a wide range of Roses, Freesia flower bouquets, and Lilies, as well as Classic Bouquets and our Colourful flower Bouquets, and our range of Flowers under £21.00. Our home page provides more information on our extensive range of next-day flower delivery services, all of which are available for next day UK flower delivery to Wing, Buckinghamshire, Or indeed anywhere in the UK! When you're thinking of a gift to give on birthdays, anniversaries, Mother's Day, Valentine's Day and other occasions, why not send flowers to Wing, Buckinghamshire? Through us, you can choose from a variety of bouquets to those close to your heart. We also offer next-day delivery service in case you want your blooms to arrive right on schedule. So if you want flowers delivered on special occasions, make sure to order flowers for delivery to Wing, Buckinghamshire. Best of all, our seven day freshness guarantee means you can rest assured knowing your special someone will enjoy their flowers for days after delivery.

Most popular flowers sent to Wing, Buckinghamshire this month 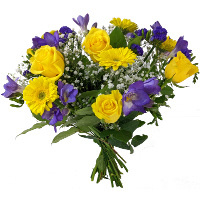 A tiny village and civil parish in the Aylesbury Vale district of Buckinghamshire, Wing is mostly neglected by those who pass by to get to Ascott, a stately home found at the edge of the village. As lovely as it is to visit Ascott, the village you pass through is also worth the stop.

If you want to see some flowers in Wing, you can take a look at the many walks around the village. There are also several events you might want to check out. Or, if you want to have a great time, why not visit some of the pubs and clubs in the area?

As small as the village may be, there are lots of ways to find something fun to do.

The remains of the Church show that Wing has an Anglo-Saxon history. However, there is evidence that it stretches far back. Archaeological digs are being carried out by The Wing Heritage Group to make sure that the heritage of the village is properly recorded and protected.

Wing rose to prominence during the 20th century when discussions were made of a possible new London airport to be constructed in town. However, a campaign was run called “Wings Off Wing” and it was a successful one at that. As a result, the Heathrow Airport was expanded instead.

Nature lovers will surely love the local walks in town. There might even be a sight of Wing flowers or two.

Thanks to the Aylesbury Ramblers Association, new waymarks were put around the 25 miles of field paths in town.

The main attraction in town is the Saxon church, which has been called as one of the best in England. A monastery church existed as early as the 7th century, but evidence proves the site was used for religious purposes as far back as that. The crypt is one of the oldest parts of the church and features Roman tiles in its ceiling from a nearby villa.

Another nearby attraction is Ascott, a Grade II listed building featuring astonishing collections and gardens. The Jacobean-style house was the property of the Rothschild's towards the end of the 19th century. Here, you will find paintings, fine furniture and lovely oriental porcelain. The gardens are also a lovely mix of formal and natural and features specimen trees, shrubs and some unusual features.

Whether you're here for a romantic date or a simple meal, there are some dining options to choose from. These are two Indian restaurants and if you just want takeaway, there is a place offering Chinese food for that. And interestingly enough, it also doubles as a fish and chips shop. If planning a romantic meal, don't forget to send flowers to Wing as a surprise for your date!

If you know someone from town who is celebrating an event, whether a birthday or graduation, why not send flowers to Wing to help them celebrate? It will surely put a smile on their faces knowing that you remembered. We can help you with that too as we have a large collection of blooms that suit just any occasion. So, order flowers for delivery to Wing from us and you get to put a smile on someone's face!