Our florists love making bouquets and arrangements for UK flower delivery, and we can send flowers to Lymm, Cheshire for you. We have a wide range of Roses, Freesia flower bouquets, and Lilies, as well as Classic Bouquets and our Colourful flower Bouquets, and our range of Flowers under £21.00. Our home page provides more information on our extensive range of next-day flower delivery services, all of which are available for next day UK flower delivery to Lymm, Cheshire, Or indeed anywhere in the UK! When you're thinking of a gift to give on birthdays, anniversaries, Mother's Day, Valentine's Day and other occasions, why not send flowers to Lymm, Cheshire? Through us, you can choose from a variety of bouquets to those close to your heart. We also offer next-day delivery service in case you want your blooms to arrive right on schedule. So if you want flowers delivered on special occasions, make sure to order flowers for delivery to Lymm, Cheshire. Best of all, our seven day freshness guarantee means you can rest assured knowing your special someone will enjoy their flowers for days after delivery.

Most popular flowers sent to Lymm, Cheshire this month

Send your fresh petals to Lymm with Clare Florist 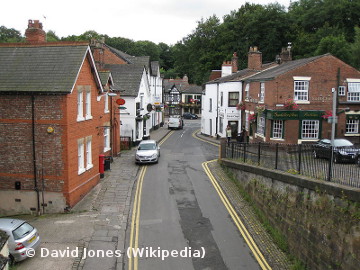 Located in the beautiful county of Cheshire in North West England, Lymm is a large village in the Warrington borough. With a rich and cultured history, the village is quintessentially charming and traditional, with its many features and attractions making it a popular destination for tourists.

As designated conservation centre, Lymm is famous for its magnificent, historic buildings. Lymm Hall was owned by the de Limme family until the 14th century and, although much altered today, it bears the remains of a moat with a 'scheduled monument' status. Meanwhile, the famous Lymm Cross, known as The Cross, is a Grade 1 listed structure. One of the few remaining of its kind in the country, its origins and initial purpose are not known. However, it dates back to the 14th century and this stunning sandstone monument proves a popular meeting place today. The Bridgewater Canal runs right through Lymm. Originally used as a transport canal taking coal to Manchester, today it serves as a picturesque recreational and leisure area for pedestrians, fishermen and cyclists. It is also popular for narrowboats, with members of the Lymm Cruising Club mooring their boats on the canal.

The perfect present for your friends in Stockport

For those who enjoy shopping, the beautiful boutiques and gorgeous gift shops offer a fabulous range of both traditional and unusual gifts, while you can view or purchase striking displays of flowers and artwork. From delightful homeware to bespoke flower delivery in Lymm, you will find some real treasures amongst its shops.

The Lymm Dam is another big visitor attraction. This beautiful lake is set amongst woodlands and meadows. Filled with all forms of wildlife, the dam offers a scenic nature reserve where visitors can enjoy birdwatching, horseriding and fishing. Lymm is easily accessible from the M56 and the M6 and there are plenty of buses to the village from nearby Warrington and Altricham.

Our flowers delivery services in Lymm, Cheshire are usually made by DPD or Royal Mail Special Delivery. 99.9% of our flowers are delivered by 5pm on the requested day - (more commonly before noon), except UK Public Holidays. We also offer a range of next-day flower delivery options in Lymm, Cheshire - specific information is available during checkout.