Our florists love making bouquets and arrangements for UK flower delivery, and we can send flowers to Charlestown, Cornwall for you. We have a wide range of Roses, Freesia flower bouquets, and Lilies, as well as Classic Bouquets and our Colourful flower Bouquets, and our range of Flowers under £21.00. Our home page provides more information on our extensive range of next-day flower delivery services, all of which are available for next day UK flower delivery to Charlestown, Cornwall, Or indeed anywhere in the UK! When you're thinking of a gift to give on birthdays, anniversaries, Mother's Day, Valentine's Day and other occasions, why not send flowers to Charlestown, Cornwall? Through us, you can choose from a variety of bouquets to those close to your heart. We also offer next-day delivery service in case you want your blooms to arrive right on schedule. So if you want flowers delivered on special occasions, make sure to order flowers for delivery to Charlestown, Cornwall. Best of all, our seven day freshness guarantee means you can rest assured knowing your special someone will enjoy their flowers for days after delivery.

Most popular flowers sent to Charlestown, Cornwall this month 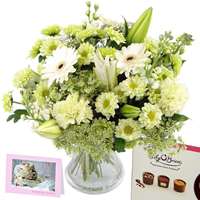 Charles Rashleigh, an entrepreneur and member of the local landowning family, built Charlestown between 1791 and 1801 as a response to the growth of the local mining industry. The port was intended to export copper and import coal but eventually it was used to export China Clay.

Today, Charlestown is a perfect example of a Georgian working port, having never lost its character. As such, the town has been used as a location for films and television. Among its credits include Hornblower, Mansfield Park and Poldark.

Here’s what you need to know about the village and port should you want to come for a visit:

Formerly known as West Polmear, Charlestown had only nine residents and a small fishing fleet that made use of the beach as harbour. The rise of the mining industry saw a project began to construct a pier in order to provide a home for the fishing fleet. A basin was also created by cutting out bedrock to allow ships to come in. Roads in the area were also widened and paved to enable wagons carrying cargo to and from the harbour to pass through.

When Charlestown was completed, it was hailed as a model Georgian “new town.” Different yet associated businesses were established in sheds and warehouses around the harbour by the 19th century. These included businesses focused on pilchard curing, shipbuilding, brick making and lime burning. The influx of businesses also saw the population rise to 3,000 and the construction of attractive period properties also sprung up.

The beauty of an unspoiled late Georgian working port is enough to lure visitors, but Charlestown offers so much more. It’s a great place for family and couples to visit, and those who belong to the latter category can make trips extra special when asking a florist to send flowers to Charlestown for their partner.

Charlestown is a harbour town and it capitalises on that fact: visitors can see at least one of the square riggers ships on the harbour. The town has a fleet of them and those visiting are promised to see at least one.

That said, here are other interesting sights in the area:

Charlestown Shipwreck and Heritage Centre. Located in St Austell, this centre highlights the many shipwrecks – an estimated quarter of a million are around the coasts of Britain – through photography and salvaged cargo.

Tregrehan Garden. This is where one finds lots of Charlestown flowers. Among the many flowers in Charlestown that can be found here, the collection of camellias is one of the most renowned.

Lost Gardens of Heligan. Covering 80 acres, this complex of walled gardens and a huge vegetable garden sit in Heligan (near Mevagissey), one of the most mysterious estates in England.

China Clay Country Park. At the Wheal Martyn China Clay Heritage Centre, visitors will learn about Cornwall’s history of china clay extraction. The centre features audio-visual displays along with a tour of the 19th-century clay works.