Our florists love making bouquets and arrangements for UK flower delivery, and we can send flowers to Cockermouth, Cumbria for you. We have a wide range of Roses, Freesia flower bouquets, and Lilies, as well as Classic Bouquets and our Colourful flower Bouquets, and our range of Flowers under £21.00. Our home page provides more information on our extensive range of next-day flower delivery services, all of which are available for next day UK flower delivery to Cockermouth, Cumbria, Or indeed anywhere in the UK! When you're thinking of a gift to give on birthdays, anniversaries, Mother's Day, Valentine's Day and other occasions, why not send flowers to Cockermouth, Cumbria? Through us, you can choose from a variety of bouquets to those close to your heart. We also offer next-day delivery service in case you want your blooms to arrive right on schedule. So if you want flowers delivered on special occasions, make sure to order flowers for delivery to Cockermouth, Cumbria. Best of all, our seven day freshness guarantee means you can rest assured knowing your special someone will enjoy their flowers for days after delivery.

Most popular flowers sent to Cockermouth, Cumbria this month 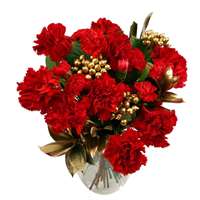 
Thanks to its proximity to lakes and mountains, Cockermouth has always been a destination chosen by tourists for its calmness. It also helps that the town was called home by poet William Wordsworth and his sister Dorothy Wordsworth.

Cumbria is predominantly a rural county and is one of the most beautiful regions in the UK. The town lies just outside the boundary of the Lake District National Park. It is a very attractive town that is not as touristy as Keswick and Ambleside.

Being a picturesque town, it's never a bad idea to take a date out to Cumbria for a day or the entire weekend. You can even send flowers to Cumbria to start off the romantic getaway.

A fort at Derventio, which is now the adjoining village of Papcastle, was created by the Romans. It became a major route for troops that were headed to Hadrian's Wall.

Nothing much happened after the Romans left, but the town experienced much development under the Normans. It was during this time that the town developed a distinctive medieval layout which it still retains to this day.

Whether it’s historic sites or gorgeous landscapes, Cockermouth has a lot to offer everyone.

Jennings – a brewery that offers tours about the place as well as explaining the different processes involved in brewing traditional beer.

Elva Plain Stone Circle – lies on the southern slope of Elva Hill and contains 15 stones. It is known as a fairy hill and dates back from late Neolithic times.

Harris Park – was given to Cockermouth by Mrs Harris in memory of her husband, Joseph of Harris's Linen Mill. This park features a play area, tennis courts, a bowling green and many areas for walks.

Cockermouth Castle – a partly ruined Norman castle which was the home of Pamela, The Dowager Lady Egremont. The castle is located at the confluence of the Rivers Cocker and Derwwent. It shares a similar feature with the Tower in Pisa in that its tower is also tilting.

Wordsworth House – an 18th century Georgian townhouse that was the home of William Wordsworth. The house is also site of some lovely flowers in Cockermouth, particularly daffodils.

Main Street is home to lovely Cockermouth flowers while the Market Place area is a hub for the arts.

Bitter Beck Pottery – the studio that is home to local potter Joan Hardie.

These are just some of the artistic hubs found in the Market Place. There are more arts and crafts ships to be found around the area.

Experience this wonderful town by booking your next getaway for Cockermouth, Cumbria!