Sending Flowers to Avonwick for next day delivery 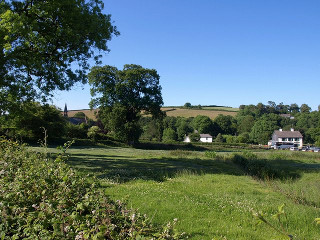 Avonwick is a lovely village in Devon on the river Avon, from which it derives its name. In 2001 it had a population of 360, but there have been two new developments which have expanded it quite rapidly. There is still a strong sense of community in the village with a good pub, a restaurant, a chapel and a village shop. The village has a few guest houses and B&Bs and the shop provides a service for local owners or visitors creating 'welcome packs' of essentials such as tea, coffee, sugar and bread plus anything else that might be deemed necessary. Avonwick also hosts one of the oldest lawn tennis clubs in the world. All of these factors contribute to a village that's bustling and has retained its friendly air and community.

The village is within an easy drive of the beaches in this area of Devon, such as Paignton, Brixton and Torquay. It's also right next to Dartmoor, with its beautiful valleys, important wetlands and breathtaking scenery. Avonwick flowers are particularly interesting. Many species of wild flowers grow along the banks of the Avon. Follow the river as far upstream as Bristol and you can see some unique flora and fauna, but even as far south as Devon there are some lovely rare wild flowers to be seen. The nearby dam at South Brent has some stunning walks that offer some rare plant life and wonderful birdlife.

In the area around Avonwick flowers are very much part of the culture. Local flower shows offer those from the surrounding area the chance to exhibit their prized flowers. There are some popular ones in towns such as Torquay that include crafts and vegetables too, as well as separate children's classes. There are also some stunning gardens open to the public, such as The Garden House in Buckland Monachorum with its 6000 varieties of plant and lovely walled garden.

Most popular flowers sent to Avonwick, Devon this month

Our florists love making bouquets and arrangements for UK flower delivery, and we can send flowers to Avonwick, Devon for you. We have a wide range of Roses, Freesia flower bouquets, and Lilies, as well as Classic Bouquets and our Colourful flower Bouquets, and our range of Flowers under £21.00. Our home page provides more information on our extensive range of next-day flower delivery services, all of which are available for next day UK flower delivery to Avonwick, Devon, Or indeed anywhere in the UK! When you're thinking of a gift to give on birthdays, anniversaries, Mother's Day, Valentine's Day and other occasions, why not send flowers to Avonwick, Devon? Through us, you can choose from a variety of bouquets to those close to your heart. We also offer next-day delivery service in case you want your blooms to arrive right on schedule. So if you want flowers delivered on special occasions, make sure to order flowers for delivery to Avonwick, Devon. Best of all, our seven day freshness guarantee means you can rest assured knowing your special someone will enjoy their flowers for days after delivery.

Our flowers delivery services in Avonwick, Devon are usually made by DPD or Royal Mail Special Delivery. 99.9% of our flowers are delivered by 5pm on the requested day - (more commonly before noon), except UK Public Holidays. We also offer a range of next-day flower delivery options in Avonwick, Devon - specific information is available during checkout.