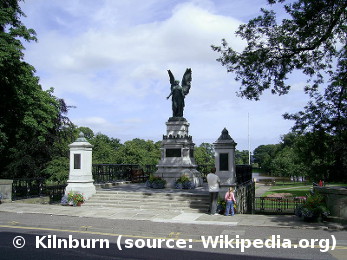 Cupar is located between Dundee and Glenrothes in Fife, in the east of Scotland. The town, which has a population of 8,980, grew up around Cupar Castle, which was owned by the Earls of Fife and inhabited by the local Sherriff. In the 13th century, Alexander III, the king of Scotland, used the town as the site of a meeting between clergy, nobility and the burgesses to discuss who was going to be the predecessor to the first Scottish parliament.

The A91 runs through Cupar, giving it good access to St. Andrews, the M90 and the A92 -which links Kirkcaldy and Dundee. These transport links ease flower delivery to Cupar throughout the year. Cupar is also served by the East Coast Main Line and has a railway station in the south-east of the town.

As well as being close to major sites in Fife, Cupar has some impressive landmarks of its own. The Old Gaol, built in 1813 and designed by James Gillespie Graham, is now used by Watts of Cupar as a bar and restaurant. Cupar is filled with fascinating historic buildings, many of which are listed.

The ideal gift for your friends in Cupar

There is a good range of shops in Cupar, including many independent stores as well as the main high-street chains. Those interested in leisure activities will find that the town has plenty to offer, as there is a golf course, a cricket club, an art club, a model railway club and a camera club. The fitness centre also has a 25-metre swimming pool.

Cupar is a very green town with plenty of open spaces and attractive gardens. The town is home to the Cupar and District Floral and Horticultural Society, which has organised the Flower and Craft Show there since 1911. An important part of this, of course, involves making arrangements for flower delivery to Cupar.

Most popular flowers sent to Cupar, Fife this month

Our florists love making bouquets and arrangements for UK flower delivery, and we can send flowers to Cupar, Fife for you. We have a wide range of Roses, Freesia flower bouquets, and Lilies, as well as Classic Bouquets and our Colourful flower Bouquets, and our range of Flowers under £21.00. Our home page provides more information on our extensive range of next-day flower delivery services, all of which are available for next day UK flower delivery to Cupar, Fife, Or indeed anywhere in the UK! When you're thinking of a gift to give on birthdays, anniversaries, Mother's Day, Valentine's Day and other occasions, why not send flowers to Cupar, Fife? Through us, you can choose from a variety of bouquets to those close to your heart. We also offer next-day delivery service in case you want your blooms to arrive right on schedule. So if you want flowers delivered on special occasions, make sure to order flowers for delivery to Cupar, Fife. Best of all, our seven day freshness guarantee means you can rest assured knowing your special someone will enjoy their flowers for days after delivery.

Our flowers delivery services in Cupar, Fife are usually made by DPD or Royal Mail Special Delivery. 99.9% of our flowers are delivered by 5pm on the requested day - (more commonly before noon), except UK Public Holidays. We also offer a range of next-day flower delivery options in Cupar, Fife - specific information is available during checkout.

There is no small print! When you order flowers for delivery in Cupar, Fife with Clare Florist, that's exactly what you get - flowers delivered in Cupar, Fife, without any fuss.