Browse our selection for delivery to Falkland 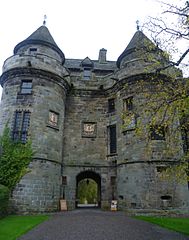 Falkland is a town and former royal burgh, in Fife, Scotland, located at the foot of the Lomond Hills. It lies around 15 to 20 miles from the city of Perth and about 22 miles from Dundee. The town has a population of just over 1000 people and therefore maintains a close-knit community feel, clustered around a few central roads and basic amenities. The biggest attraction of the area is the Lomond Hills Regional Park, which is very popular with visitors, especially walkers, but is also home to a number of estates, farms and historical sites. One of the key features, East Lomond (also known as Falkland Hill) towers around 450m over the town.

Falkland has a long and interesting history and a settlement is believed to have existed on the spot since the 12th Century. However, the construction of the castle in 1160 really marked the true birth of the town. It was probably built on the site of an existing hunting lodge when the land was granted by King Malcolm IV, but it has subsequently been replaced by the now-standing Falkland Palace. Although the town was made a royal burgh, it did not function like others of its ilk, instead relying primarily on the Palace, which was formerly a residence for Scottish royalty.

Send flowers to friends in Falkland

Nowadays, Falkland serves primarily as a base for exploration of the major attractions in the region, including the Lomond Hills parkland and the protected heritage site of the Falkland Palace. The Viscounts of Falkland gave their name to the South Atlantic islands which have now eclipsed the renown of this small historic town. In terms of transport connections, the nearest railway station is at Ladybank, three miles east, with connections to Edinburgh and elsewhere, but flower delivery to Falkland is easily facilitated by the road network, most notably the A91 and M90 motorway.

Most popular flowers sent to Falkland, Fife this month

Our florists love making bouquets and arrangements for UK flower delivery, and we can send flowers to Falkland, Fife for you. We have a wide range of Roses, Freesia flower bouquets, and Lilies, as well as Classic Bouquets and our Colourful flower Bouquets, and our range of Flowers under £21.00. Our home page provides more information on our extensive range of next-day flower delivery services, all of which are available for next day UK flower delivery to Falkland, Fife, Or indeed anywhere in the UK! When you're thinking of a gift to give on birthdays, anniversaries, Mother's Day, Valentine's Day and other occasions, why not send flowers to Falkland, Fife? Through us, you can choose from a variety of bouquets to those close to your heart. We also offer next-day delivery service in case you want your blooms to arrive right on schedule. So if you want flowers delivered on special occasions, make sure to order flowers for delivery to Falkland, Fife. Best of all, our seven day freshness guarantee means you can rest assured knowing your special someone will enjoy their flowers for days after delivery.

Our flowers delivery services in Falkland, Fife are usually made by DPD or Royal Mail Special Delivery. 99.9% of our flowers are delivered by 5pm on the requested day - (more commonly before noon), except UK Public Holidays. We also offer a range of next-day flower delivery options in Falkland, Fife - specific information is available during checkout.