Our florists love making bouquets and arrangements for UK flower delivery, and we can send flowers to Lymington, Hampshire for you. We have a wide range of Roses, Freesia flower bouquets, and Lilies, as well as Classic Bouquets and our Colourful flower Bouquets, and our range of Flowers under £21.00. Our home page provides more information on our extensive range of next-day flower delivery services, all of which are available for next day UK flower delivery to Lymington, Hampshire, Or indeed anywhere in the UK! When you're thinking of a gift to give on birthdays, anniversaries, Mother's Day, Valentine's Day and other occasions, why not send flowers to Lymington, Hampshire? Through us, you can choose from a variety of bouquets to those close to your heart. We also offer next-day delivery service in case you want your blooms to arrive right on schedule. So if you want flowers delivered on special occasions, make sure to order flowers for delivery to Lymington, Hampshire. Best of all, our seven day freshness guarantee means you can rest assured knowing your special someone will enjoy their flowers for days after delivery.

Most popular flowers sent to Lymington, Hampshire this month

Get hand-tied flowers delivered to Lymington! 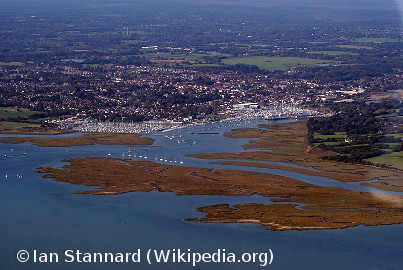 Lymington is a Georgian market town on the Lymington River overlooking the Solent. It is located in the New Forest in the county of Hampshire. Its proximity to the New Forest makes it a popular tourist destination and, as such, it has a well-developed infrastructures and tourism industry.

It is world-famous as a sailing resort and has three marinas, including the two large marinas of Berthon and Haven. It also has two sailing clubs: RLYC and Lymington Town. There are a number of beaches nearby, as well as an open-air seawater bath, which was constructed in 1833.

Lymington is surrounded by nature. The Lymington to Keyhaven Nature Reserve covers an area of 500 acres and contains lagoons, reed beds, salt marsh and mud flats. It protects a number of endangered plant and animal species and is also an area of historical significance. In the 18th century, Lymington was Britain's largest producer of sea salt and it still contains many reminders of this industrial era. Nearby is the New Forest, comprising beautiful ancient woodlands, an excellent place for a walking or camping holiday.

The best gift for your friends in Lymington

The town itself also offers a number of interesting shops, independent boutiques and florists so, if you know someone in Lymington, flowers can be sent to him or her by next day delivery. On Saturdays, the High Street plays host to a lively market, which is believed to date back to the 13th century. St Thomas Church, founded around 1250, can be found at the top end of the High Street, while at the other end a cobblestone road takes you down to the Old Town Quay, still used by commercial fishing boats.

Ferries operate from Lymington to Yarmouth on the Isle of Wight and leave every 45 minutes in the summer. Lymington is well served by road and rail and its nearest airport is Southampton Airport, which operates national and international flights.