Our florists love making bouquets and arrangements for UK flower delivery, and we can send flowers to Stornoway, Isle Of Lewis for you. We have a wide range of Roses, Freesia flower bouquets, and Lilies, as well as Classic Bouquets and our Colourful flower Bouquets, and our range of Flowers under £21.00. Our home page provides more information on our extensive range of next-day flower delivery services, all of which are available for next day UK flower delivery to Stornoway, Isle Of Lewis, Or indeed anywhere in the UK! When you're thinking of a gift to give on birthdays, anniversaries, Mother's Day, Valentine's Day and other occasions, why not send flowers to Stornoway, Isle Of Lewis? Through us, you can choose from a variety of bouquets to those close to your heart. We also offer next-day delivery service in case you want your blooms to arrive right on schedule. So if you want flowers delivered on special occasions, make sure to order flowers for delivery to Stornoway, Isle Of Lewis. Best of all, our seven day freshness guarantee means you can rest assured knowing your special someone will enjoy their flowers for days after delivery.

Most popular flowers sent to Stornoway, Isle Of Lewis this month 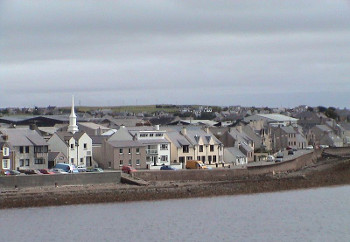 Next day flower delivery to Stornoway

Stornoway on the Isle of Lewis is the administrative centre of the Outer Hebrides and the largest town in the Western Isles. The town has a population of 9,000 with another 3,000 people living in surrounding villages.

Originally built as a Viking settlement, it has a famous sheltered harbour, called "steering bay" in Old Norse, from which the name Stornoway derives.

The Western Isles are surrounded by a grassy, low lying plain called the machair. This area used to be a beach, but as land in the Western Isles and the northwest Scotland rose after the last ice sheets melted about 10,000 years ago, the machair was carried up and today, stands higher than the present beaches. The machair has a sandy soil, 90% of which is made up of old sea shells. The lime neutralises acidic water coming in from the peat bogs inland and creates a rich habitat for wildflowers.

There are rare flowers such as many varieties of orchid, including Irish lady's tresses: a genus of orchid and yellow rattle. Each bay and meadow has its own machair with different displays of buttercups, daises, harebells and clovers as well orchids, heathers, cotton grass, iris, primrose and bog pimpernel. Walk around the machair during the late spring and use the colours as an inspiration when you arrange a next day flower delivery to Stornoway.

Music and laughter in Stornoway

There's music in the summertime. Stornoway is one of the Western Isles venues for the annual Hebridean Celtic Festival that takes place in July. The festival attracts international artists and Gaelic talent. It includes street performances and music workshops for an estimated 15,000 summer visitors.

The Gaelic Associations' Royal National Mod has been held in Stornoway twice over the past 10 years. This is a Gaelic, music, song and arts festival that compares with the Eisteddfod in Wales.

Our flowers delivery services in Stornoway, Isle Of Lewis are usually made by DPD or Royal Mail Special Delivery. 99.9% of our flowers are delivered by 5pm on the requested day - (more commonly before noon), except UK Public Holidays. We also offer a range of next-day flower delivery options in Stornoway, Isle Of Lewis - specific information is available during checkout.