Our florists love making bouquets and arrangements for UK flower delivery, and we can send flowers to Boston, Lincolnshire for you. We have a wide range of Roses, Freesia flower bouquets, and Lilies, as well as Classic Bouquets and our Colourful flower Bouquets, and our range of Flowers under £21.00. Our home page provides more information on our extensive range of next-day flower delivery services, all of which are available for next day UK flower delivery to Boston, Lincolnshire, Or indeed anywhere in the UK! When you're thinking of a gift to give on birthdays, anniversaries, Mother's Day, Valentine's Day and other occasions, why not send flowers to Boston, Lincolnshire? Through us, you can choose from a variety of bouquets to those close to your heart. We also offer next-day delivery service in case you want your blooms to arrive right on schedule. So if you want flowers delivered on special occasions, make sure to order flowers for delivery to Boston, Lincolnshire. Best of all, our seven day freshness guarantee means you can rest assured knowing your special someone will enjoy their flowers for days after delivery.

Most popular flowers sent to Boston, Lincolnshire this month

Make our petals reach the Borough of Boston 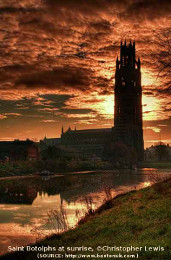 Boston is a market town and small port on the Lincolnshire coast. With a current population of just over 58,000, the settlement in this area pre-dates the 11th century Norman Conquest. It shifted its location as the coastline and tidal flats changed shape over the centuries.

The town's name derives from its patron saint, St. Botolph, a Saxon monk who preached around eastern England and established a monastery in the 7th century on the banks of Boston's main river, the River Witham. Boston became an important wool and cotton-trading town by the Middle Ages, conducting commerce with the Hanseatic ports on the North and Baltic Seas. It also became famous for religious dissent in the 17th century. Some of the Pilgrim Fathers who set sail for America in the 17th century in the Mayflower came from Boston. A memorial to the Pilgrim Fathers stands just four miles outside Boston at Scotia Creek.

The perfect gift for your Bostonian friends

St. Botolph's Parish Church, which dates from the early 14th century, is the town's most famous landmark and is the largest parish church in England. Open spaces and three country parks surround Boston. Witham Way Country Park is a 38-acre open space along the banks of the River Witham that was once used as allotments. The site is mainly shrub and grassland and attracts wildflowers, butterflies, dragonflies and yellowhammers. There is a cycle path along a disused former railway line.

The Havenside Country Park overlooks the saltwater stretch of the River Witham and has a mixture of mud flats, estuary, seasonal ponds and meadows as well as scrub and grassland. Sea lavender and grasswort colonise the mud flats. Stroll along the sea bank path to the Pilgrim Fathers memorial inside the park. Remember that when you send flowers to Boston, your friend who receives them may be descended from the Pilgrims.