Our florists love making bouquets and arrangements for UK flower delivery, and we can send flowers to Sleaford, Lincolnshire for you. We have a wide range of Roses, Freesia flower bouquets, and Lilies, as well as Classic Bouquets and our Colourful flower Bouquets, and our range of Flowers under £21.00. Our home page provides more information on our extensive range of next-day flower delivery services, all of which are available for next day UK flower delivery to Sleaford, Lincolnshire, Or indeed anywhere in the UK! When you're thinking of a gift to give on birthdays, anniversaries, Mother's Day, Valentine's Day and other occasions, why not send flowers to Sleaford, Lincolnshire? Through us, you can choose from a variety of bouquets to those close to your heart. We also offer next-day delivery service in case you want your blooms to arrive right on schedule. So if you want flowers delivered on special occasions, make sure to order flowers for delivery to Sleaford, Lincolnshire. Best of all, our seven day freshness guarantee means you can rest assured knowing your special someone will enjoy their flowers for days after delivery.

Most popular flowers sent to Sleaford, Lincolnshire this month 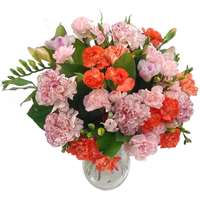 On the middle eastern side of England is Sleaford, a market town in the county of Lincolnshire. It’s located right beside the Fenlands, a natural marshy region. The nearest town is Grantham, located eighteen kilometres away, with Boston and Lincoln nearby. There are over 17,000 residents living in this town. The easiest roads to take to Sleaford are the A15, and the A17.

Sleaford is listed in the 1086 Domesday book, but it also has the distinction of being recorded from before that time. In 852, a record of the name Sleaford was found in a charter, and listed as “Sliowaford”. Sleaford is old English, sliow and ford, meaning “a ford over a muddy river”.

Sleaford was granted the right to have a market in the 12th century. The town developed quickly, and its main trade was wool. At this time, Old Sleaford slowly declined.

There has been great evidence of ancient civilisations found in Sleaford. History dates back to the Iron Age, with an ancient path found crossing over the river Slea. The Corieltauvi tribe use to live here during the first century. There has also been evidence found of Saxon and Roman settlements. Sleaford was a hub of activity, with a court and a market.

There are medieval records that state that Sleaford was separated into two parts: Old Sleaford, and New Sleaford. New Sleaford had the new market, and the St. Denys Church.

Sleaford Castle was built during medieval times in the early 1120s by the owners, the Bishops of Lincoln, but is now in ruins. It’s believed that people lived there up to 1555, but later in the 16th century, it started disintegrating. King John and King Henry the VIII are believed to have stayed at the castle.

St. Denys Church still remains standing today. It was built in the medieval age, in the 12th century. It has notable tracery and a stone spire which is one of the oldest in England.

Sleaford was mainly an agricultural town until the 20th century. It had a large cattle market, and seed production companies had been established in the late 19th century. Transportation links promoted the trade of seeds and malting. The land is considered to be good agricultural quality. Vegetable farming has increased into the 21st century, with animal farming declining. This land has been valued for being some of the most arable farmland in the entire country.

The trade has shifted to retail, health, wholesale, and manufacture. The National Centre for Craft and Design was built on an old wharf.

If you’ve been searching for the best gift to send to Sleaford, Lincolnshire, might we suggest a beautiful fresh floral arrangement? We have a wide variety of fragrant and ornamental flowers to choose from when you want to send flowers to Sleaford. Order your choices today, and they’ll be made up for you, and delivered to Sleaford town by the next day. We can deliver gifts for birthday, Valentine’s Day, wedding, special event, congratulations, or just to say I’m thinking of you.

Our flowers delivery services in Sleaford, Lincolnshire are usually made by DPD or Royal Mail Special Delivery. 99.9% of our flowers are delivered by 5pm on the requested day - (more commonly before noon), except UK Public Holidays. We also offer a range of next-day flower delivery options in Sleaford, Lincolnshire - specific information is available during checkout.