Send our fresh and hand-tied flowers to Fallowfield! 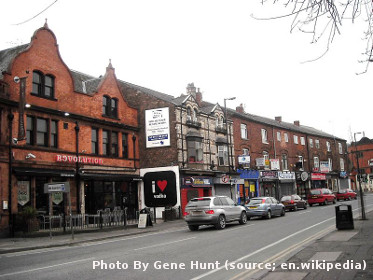 Situated in the North West of England, Fallowfield is a large locality just to the south of Manchester city centre. Its most notable feature is the large campus belonging to the University of Manchester although the area is popular with students from other educational establishments as well. Aside from the Fallowfield Campus, other distinctive structures include the Church of the Holy Trinity at Platt Hall and the South Manchester Synagogue.

The diverse population has resulted in an eclectic mix of restaurants and bars. You can find every cuisine here, from vegan to Italian but it is the numerous Indian restaurants that Fallowfield is particularly noted for. Other local amenities include plentiful shops, several schools, a supermarket and a number of hotels. You can even find a florist offering next day flower delivery to Fallowfield. Or take a stroll round one of the many parks - Richmond, Kingswood, Platt Fields and Ladybarn Parks are all within easy reach.

Fallowfield has excellent transport links with frequent buses along Wilmslow Road into the heart of the city. For a more leisurely experience, walk or cycle along the Fallowfield Loopline that follows an old railway path. Manchester itself is served by buses, trains, a tram system and an international airport.

The perfect surprise for your friends in Fallowfield

The city of Manchester is one of the most visited in England, offering great shopping opportunities as well as a thriving music and cultural scene. It's also the home of one of the most well-love football teams in the world, Manchester United. Many of the city's structures are built from the abundant red bricks that are so characteristic of the region. Visitors will be amazed by the astonishing neo-Gothic architecture of the Town Hall whilst the contemporary Beetham Tower is the tallest residential tower in the country. Having undergone an extensive regeneration in recent years, Manchester and Fallowfield have established themselves as vibrant and exciting areas with something for everyone.

Most popular flowers sent to Fallowfield, Manchester this month

Our florists love making bouquets and arrangements for UK flower delivery, and we can send flowers to Fallowfield, Manchester for you. We have a wide range of Roses, Freesia flower bouquets, and Lilies, as well as Classic Bouquets and our Colourful flower Bouquets, and our range of Flowers under £21.00. Our home page provides more information on our extensive range of next-day flower delivery services, all of which are available for next day UK flower delivery to Fallowfield, Manchester, Or indeed anywhere in the UK! When you're thinking of a gift to give on birthdays, anniversaries, Mother's Day, Valentine's Day and other occasions, why not send flowers to Fallowfield, Manchester? Through us, you can choose from a variety of bouquets to those close to your heart. We also offer next-day delivery service in case you want your blooms to arrive right on schedule. So if you want flowers delivered on special occasions, make sure to order flowers for delivery to Fallowfield, Manchester. Best of all, our seven day freshness guarantee means you can rest assured knowing your special someone will enjoy their flowers for days after delivery.

Our flowers delivery services in Fallowfield, Manchester are usually made by DPD or Royal Mail Special Delivery. 99.9% of our flowers are delivered by 5pm on the requested day - (more commonly before noon), except UK Public Holidays. We also offer a range of next-day flower delivery options in Fallowfield, Manchester - specific information is available during checkout.