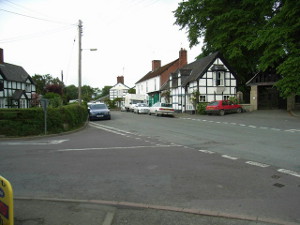 The picturesque village of Aberriw in Powys is situated on the river Rhiw and features a historic church, traditional black and white cottages and a thriving community spirit.

The village has often been recognised as the best kept in Wales and hosts a number of local clubs and associations including a bowling club, drama and music society and Berriew FC.

The village church is named after St Beuno as it is said he was born in Aberriw. The church was rebuilt in 1875, but has retained some of its earlier stained glass windows.

Glansevern Hall Gardens lie just outside of the village and features 25 acres of planted ground offering year-round foliage. There's also a wooded walk that leads to the river Severn and a tranquil rock garden.

Glansevern Hall itself, which dates around 1801, is said to evoke romance and peace due to its elegant construction and views of the Kerry hills. The grounds feature a raised bird-hide making Glansevern Hall a popular destination for bird and wildlife watchers.

Artist Andrew Logan bought the village squash court and converted it into The Andrew Logan Museum of Sculpture. It's the only European museum dedicated to an artist who is still alive and features examples of the artist's work for locals and visitors to peruse and enjoy.

The nearby listed formal gardens of Gregynog feature ancient oak trees, roses and water gardens across 750 acres. The courtyard is used to showcase cultural events throughout the year and there's also a café and shop.

Aberriw has all the essential amenities that you would expect in a small village including a butcher and grocery store. There's also a traditional Blacksmith, several coffee shops and a 17th century inn.

As is the case with all small villages, modern road networks make it simple to order and deliver goods. So to send flowers to Aberriw for example is no problem; Clare Florist can get next day flower deliveries to even such a secluded location as the gorgeous village of Aberriw.

Most popular flowers sent to Aberriw, Powys this month

Our florists love making bouquets and arrangements for UK flower delivery, and we can send flowers to Aberriw, Powys for you. We have a wide range of Roses, Freesia flower bouquets, and Lilies, as well as Classic Bouquets and our Colourful flower Bouquets, and our range of Flowers under £21.00. Our home page provides more information on our extensive range of next-day flower delivery services, all of which are available for next day UK flower delivery to Aberriw, Powys, Or indeed anywhere in the UK! When you're thinking of a gift to give on birthdays, anniversaries, Mother's Day, Valentine's Day and other occasions, why not send flowers to Aberriw, Powys? Through us, you can choose from a variety of bouquets to those close to your heart. We also offer next-day delivery service in case you want your blooms to arrive right on schedule. So if you want flowers delivered on special occasions, make sure to order flowers for delivery to Aberriw, Powys. Best of all, our seven day freshness guarantee means you can rest assured knowing your special someone will enjoy their flowers for days after delivery.

Our flowers delivery services in Aberriw, Powys are usually made by DPD or Royal Mail Special Delivery. 99.9% of our flowers are delivered by 5pm on the requested day - (more commonly before noon), except UK Public Holidays. We also offer a range of next-day flower delivery options in Aberriw, Powys - specific information is available during checkout.