Our florists love making bouquets and arrangements for UK flower delivery, and we can send flowers to Chertsey, Surrey for you. We have a wide range of Roses, Freesia flower bouquets, and Lilies, as well as Classic Bouquets and our Colourful flower Bouquets, and our range of Flowers under £21.00. Our home page provides more information on our extensive range of next-day flower delivery services, all of which are available for next day UK flower delivery to Chertsey, Surrey, Or indeed anywhere in the UK! When you're thinking of a gift to give on birthdays, anniversaries, Mother's Day, Valentine's Day and other occasions, why not send flowers to Chertsey, Surrey? Through us, you can choose from a variety of bouquets to those close to your heart. We also offer next-day delivery service in case you want your blooms to arrive right on schedule. So if you want flowers delivered on special occasions, make sure to order flowers for delivery to Chertsey, Surrey. Best of all, our seven day freshness guarantee means you can rest assured knowing your special someone will enjoy their flowers for days after delivery.

Most popular flowers sent to Chertsey, Surrey this month

Have hand-tiend flowers delivered to Chertsey 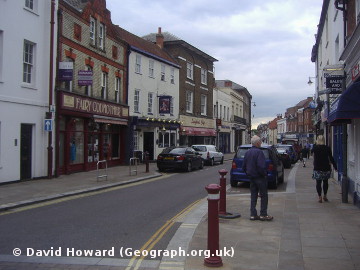 The town of Chertsey forms part of Surrey and is situated along the River Thames. The town is a short drive southwest of central London and contains several examples of Georgian architecture, which enhance the traditional small town atmosphere of the area. With a long history of metal working, Chertsey is now a popular commuter town and acts as a base for several large electronics companies.

The town is also well-known as the home to Thorpe Park, a popular theme park that attracts millions of guests each year. In addition to the theme park, Chertsey has a number of historical landmarks such as St Peter's Church and Chertsey Bridge, which was built by James Paine.

There's also a museum, which holds an annual event called The Black Cherry Fair, inviting guests to listen to live music and enjoy refreshments within the grounds. There's no shortage of green space in the area with Botley Park and St Anne's Hill being particularly popular. St Anne's Hill is an ideal spot to watch planes coming and going from the nearby Heathrow Airport. Chertsey is also home to the oldest greengrocers shop in the country, Eithel Taylor and several traditional pubs serving real ale. There's a good range of cafes and restaurants, offering cuisines from across the world including Italian, Chinese and Turkish.

The perfect gift for your friends in Chertsey

There's also an annual agricultural show, which showcases the best examples of Chertsey flowers, food and crafts while displaying agricultural techniques and animal husbandry. The event lasts for two days and offers an array of family entertainment. Additionally, local produce including vegetables and flowers are sold and introductions to various crafts are available.The town has a railway station and regular bus service, which provide good links to London and the rest of the county. Heathrow Airport can be reached in less than thirty minutes and the M3 and M25 are in easy reach.

Our flowers delivery services in Chertsey, Surrey are usually made by DPD or Royal Mail Special Delivery. 99.9% of our flowers are delivered by 5pm on the requested day - (more commonly before noon), except UK Public Holidays. We also offer a range of next-day flower delivery options in Chertsey, Surrey - specific information is available during checkout.