Most popular flowers sent to Shoreham By Sea, West Sussex this month

Get flowers delivered to Shoreham-By-Sea with Clare Florist 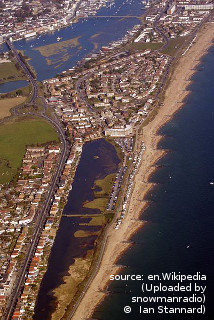 The pretty little town of Shoreham-by-Sea, referred to as Shoreham much of the time, is situated on the Sussex coast in the south of England between Worthing and Brighton & Hove. It's a haven of English quaintness with the River Adur running down to the sea, shingle beaches and soft rolling countryside right on the doorstep.

The river itself is home to many birds, including Dunlins and Lapwing, Ringed Plovers and Cormorants. They gather on the mudflats of the river at half-tide, ready to fish for eels and flatfishes. Another common sight within the town is the pied wagtail, which makes its appearance during the winter months.

Shoreham's main church, St Mary d Haura, dates back to Norman times but has seen its share of devastation and ruin. It's now only half its original size following destruction during the civil war. The pleasant town centre welcomes visitors with a variety of pubs and restaurants and is popular with visitors, particularly from London, which is just over an hour away by train.

It is well served by all the typical high street shops as well as other local ones, including those selling fresh local produce and florists who are happy to arrange next day flower delivery to Shoreham-by-Sea and beyond. One of the largest farmers markets in the Sussex area takes place in Shoreham by Sea and is held monthly in East Street with a variety of stallholders selling locally produced meat, cakes, vegetables and preserves.

The perfect gift for your friends in Burnley

Transport around the town is good and for those wishing to travel further afield, the Shoreham by Sea railway station, situated on the West Coast Mainline, offers regular high-speed transport. Local bus services, run by Brighton and Hove buses and Compass Travel, offer a frequent service to local destinations. Shoreham-by-Sea also has its own privately owned airport, which is the oldest airport in the United Kingdom, having been founded in 1910 and which is host to an annual air show.

Our flowers delivery services in Shoreham By Sea, West Sussex are usually made by DPD or Royal Mail Special Delivery. 99.9% of our flowers are delivered by 5pm on the requested day - (more commonly before noon), except UK Public Holidays. We also offer a range of next-day flower delivery options in Shoreham By Sea, West Sussex - specific information is available during checkout.