Our florists love making bouquets and arrangements for UK flower delivery, and we can send flowers to Warminster, Wiltshire for you. We have a wide range of Roses, Freesia flower bouquets, and Lilies, as well as Classic Bouquets and our Colourful flower Bouquets, and our range of Flowers under £21.00. Our home page provides more information on our extensive range of next-day flower delivery services, all of which are available for next day UK flower delivery to Warminster, Wiltshire, Or indeed anywhere in the UK! When you're thinking of a gift to give on birthdays, anniversaries, Mother's Day, Valentine's Day and other occasions, why not send flowers to Warminster, Wiltshire? Through us, you can choose from a variety of bouquets to those close to your heart. We also offer next-day delivery service in case you want your blooms to arrive right on schedule. So if you want flowers delivered on special occasions, make sure to order flowers for delivery to Warminster, Wiltshire. Best of all, our seven day freshness guarantee means you can rest assured knowing your special someone will enjoy their flowers for days after delivery.

Most popular flowers sent to Warminster, Wiltshire this month

Have fresh flowers delivered to Warminster with Clare Florist 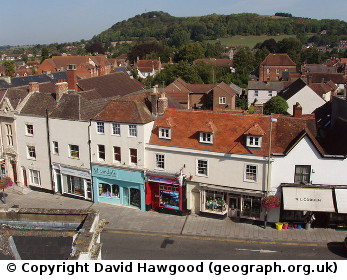 To the south west of Salisbury plain is the Wiltshire town of Warminster. Sitting on the A36 between Salisbury and Bath Warminster attracts a number of visitors every year and is one of the oldest established towns in the area with trading records dating back to the Middle Ages. One of the town's peculiarities is that it was the setting for a number of UFO sightings in the 1960's and 1970's. People reported hearing strange noises as well as seeing strange objects in the sky. To this day groups meet on Cradle Hill and reminisce about the experiences. The media coverage of the sightings meant that the number of visitors to the town increased overnight.

Warminster town offers plenty of accommodation options ranging from bed and breakfast in local farmhouses to well known hotel chains. Camping and caravanning is popular in the area and there are a number of sites in the countryside around the town. The local tourist and visitors centre maintains an up to date list of accommodation options.

The town has long been primarily recognised as a military centre and still is the home of a Military Academy. Many of the towns inhabitants are ex-servicemen who have decided to make the town their home following their retirement or return from action. Warminster was once a busy coaching centre and has a number of traditional hostelries providing traditional food and ale.

The perfect gift to surprise your friends in Warminster

One of the biggest attractions to the town is the surrounding countryside. Designated an area of outstanding natural beauty the countryside attracts cyclists, horse riders and walkers in their thousands through the summer months. The town's market town history means that its visitors are not short of places to shop and alongside well-known retailers there are a number of independent stores, gift shops and flower shops. If you are visiting relatives in the region there are a number of places to arrange next day flower delivery to Warminster town itself.