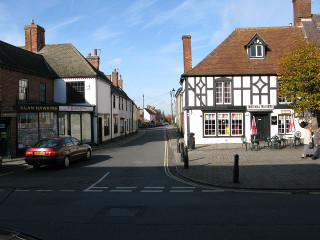 Royal Wootton Bassett is a small market town in Wiltshire just six miles southwest of Swindon. The town came to prominence at the beginning of the 21st century for the tributes its population paid to military repatriation funeral processions.

Between April 2007 and September 2011, the British Armed Forces repatriated the bodies of servicemen and women who had been killed in the Iraq and Afghanistan wars to the RAF Lyneham air base, situated just four miles from Wootton Bassett. Local people began to assemble along the route taken by the hearses through the town, with the number of people sometimes exceeding 1,000. As an acknowledgment of these tributes, Queen Elizabeth II bestowed the "Royal" title on the town in 2011. Royal Wotton Bassett became the third royal town in England after Royal Leamington Spa and Royal Tunbridge Wells.

Lydiard House is a Palladian mansion and home of the Viscounts Bolingbroke, set in the 260 acre Lydiard Park just six miles from Wootton Bassett. The park has huge Lebanese cedars, ancient avenues and carriageways that are popular with visitors. The lawns and trees provide a perfect picnicking area during the summer months. There is a Walled Garden that has been restored to its former glory with displays of topiary, fruit trees and flowers. During two weeks in November, it serves as the Royal British Legion's Poppy Field of Remembrance with thousands of poppy crosses planted as a memorial to fallen servicemen. This is the time to send flowers to Wootton Bassett as well as poppies.

The Neolithic stone circles at Avebury, close to Wootton Bassett, are one of the region's most famous tourist attractions. The stone circles were constructed around 2,600 BC and often host festivals and pagan weddings. There are other, older monuments close by at Silbury Hill and West Kennet Long Barrow.

Most popular flowers sent to Wootton Bassett, Wiltshire this month

Our flowers delivery services in Wootton Bassett, Wiltshire are usually made by DPD or Royal Mail Special Delivery. 99.9% of our flowers are delivered by 5pm on the requested day - (more commonly before noon), except UK Public Holidays. We also offer a range of next-day flower delivery options in Wootton Bassett, Wiltshire - specific information is available during checkout.