In many countries St. Nicholas is the main gift giver. His feast day, St Nicholas Day, is December 6th which falls early in the advent season.
In Amsterdam he arrived on the 16th of November and then moves around the country visiting schools and homes to see if the children have been good.
Small treats are left in the children's clogs so the children know he has come.
European immigrants brought cherished St. Nicholas holiday traditions to the United States. Over time these have melted into some common practises. 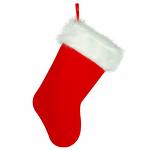 Stockings are hung by the fireplace, by poor maidens, are said to have been filled with gold coins tossed through the window by St Nicholas.

Tangerines in the toe of the stockings symbolise the gold coins.

Candy Canes were made to look like the staffs that the bishops carry, hooked at the top like a shepherds crook, showing they are the shepherds who cared for their people.

Gift giving in secret at night was done by Nicholas as he didn't want to be seen or recognised as he wanted those he helped to give thanks to God.

Aster - Story of the Magic Star of September

Merry Christmas from the team at Clare Florist