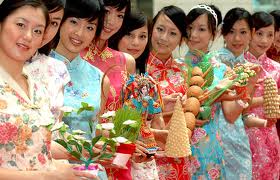 The Team at Clare Florist would like to wish all our friends, followers and customers a happy Qixi Festival.

Qixi is the Chinese romantic festival, like the western tradition of Valentine's Day. It falls on the 7th day of  the 7th lunar month, this year being the 16th August.

A young cowherd named Niulang, came across seven fairy sisters bathing in a lake. Encouraged by his mischievous companion the ox, he stole their clothes and waited to see what would happen.

The fairy sisters elected the youngest and most beautiful sister Zhinü "the weaver girl", to retrieve their clothing. She agreed to do so, but since Niulang had seen her naked, she agreed to his request for marriage. She proved to be a wonderful wife, and Niulang to be a good husband. They lived happily and had two children. But the Goddess of Heaven found out that Zhinü, a fairy girl, had married a mere mortal. The Goddess was furious and ordered Zhinü to return to heaven. On Earth, Niulang was very upset that his wife had disappeared. Suddenly, his ox began to talk, telling him that if he killed it and put on its hide, he would be able to go up to Heaven to find his wife. Crying bitterly, he killed the ox, put on the skin, and carried his two beloved children off to Heaven to find Zhinü. The Goddess discovered this and was very angry. Taking out her hairpin, the Goddess scratched a wide river in the sky to separate the two lovers forever, thus forming the Milky Way between Altair and Vega. Zhinü must sit forever on one side of the river, sadly weaving on her loom, while Niulang watches her from afar and takes care of their two children 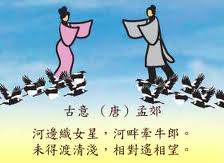 But once a year all the magpies in the world would take pity on them and fly up into heaven to form a bridge over the star Deneb in the Cygnus constellation so the lovers may be together for a single night, which is the seventh night of the seventh moon.

We are excited to celebrate Qixi and have a wonderful array of romantic flowers, Tiger lilies and Oriental orchids to offer you; ensuring that your celebrations go the way of the two lovers, bridging the gaps that life sometimes throws at us.

Quiet on the blog - New look around the corner...