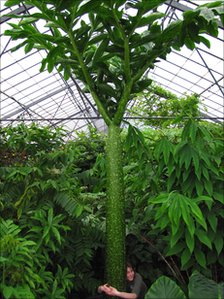 Here in Edinburgh we are lucky enough to have access to one of the world’s finest Botanic gardens in the form of the Royal Botanical Gardens just south of the city center.  This weekend the record breaking Amorphophallus titanum, which has been the center of attention due the possibility of a rare flowering, has failed to bloom ending months of anticipation. Known as the Corpse flower for its unique scent that smells like a decaying mammal, it is considering one of the most foul smelling plants on Earth. It, however, rarely flowers in the wild and even less so in captivity, but in April botanists prediction that this summer could see such a rare event occur created a flurry of excitement. However over the weekend the 153kg giant opened up to reveal, to the displeasure of all, a 14ft leaf and not the flower everyone had hoped for.  All hope is not lost though, as the Botanics predicates that we could see the first blooming of the Amorphophallus titanum plant as early as March 2013, so keep those fingers crossed and souvenir t-shirts at the ready.

Tips to keeping your Orchid alive