We have all seen, we all would know without a doubt what they’re called but do any of us know how they work? 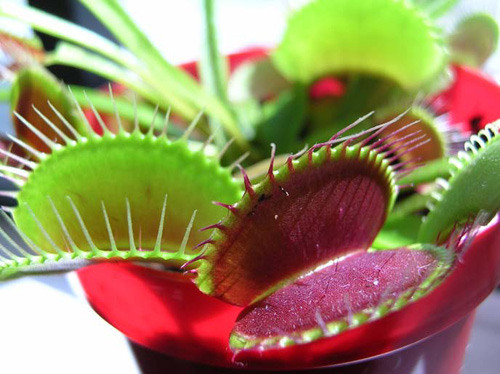 The Venus fly trap, Dionaea muscipula, is a small plant of around 3 to 10 centimetres in height with four to seven leaves growing from an underground bulb-like object. It is these leaves that form the unique trap that we have all become able to recognise. The leaf is made up of two parts, a photosynthesis capable lower half and then the terminal lobes that form a trap.

You’re probably wondering what caused this bizarre plant to evolve in this manner? Well the key is to do with the location in which it is found. Although they have been transplanted to various places, Venus Fly Traps only grow in very poor soils lacking in nitrogen and phosphorus, vital ingredients to the growth on any plant and are only found natively in a 60-mile region in Wilmington, North Carolina. The lack of nutrients in the soil meant they had to source them from somewhere else forcing them to adapt to such harsh conditions by evolving carnivorous traps or face extinction.

The trap itself is has formed from the terminal

structure of the plants leaves. The surface of the inside of each half of the trap is coated in tiny hairs that respondent to being touch. Once a beetle,  spider or other small insect lands on the inside surface initially the plant does not react to this first touch, it is only when a second hair is depressed after the first that the trap will close. The reason for this delayed reaction is to stop the plant wasting vital energy by closing on object that would give it little to no nutritional value. Once triggered, the trap closes in around 0.1 seconds capturing its prey with the interlocking stiff hair like structures around its edges. Another evolutionary feature to avoid wasting energy is once closed there are gaps in between the teeth structures meaning small prey that wouldn’t give the nutritional benefit needed during digestion can escape. As the trapped prey struggle to escape they trigger more hairs which intern causes the trap to squeeze tighter. This feedback cycle continues until the plant has encloses the prey in the equivalent of a sealed stomach upon where it releases enzymes and chemicals which breakdown the animal into all the nutrients, minerals and proteins the plant requires. The process of digestion takes around 10 days where upon the trap reopens and is ready to be used again. 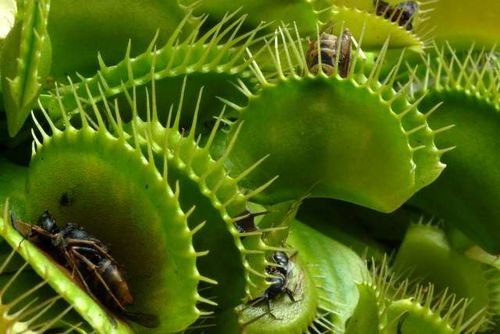 Venus fly traps are particularly difficult to cultivate due to needing very particular conditions in terms of light, heat, soil quality and moisture to survive, next week on Tuesday we will give you all the details of how you can begin to look after such an interesting plant.

Facts For your Thursday