This weeks weird and wonderful blog feature looks at one of, if not thee, largest orchid species in the world, Grammatophyllum speciosum. With numerous names and pseudonyms including the Giant Orchid, Tiger Orchid, Sugar Cane Orchid and the Queen of the Orchids this species is native to the warm and moist climates of the Asian tropics in the exposed areas of the lowland tropical rain forest.

In the wild this plant usually grows as an epiphyte in the nooks and crannies of large, sturdy trees where its roots become intertwined with each other to form a basket like structure that can capture the nutrients in needs. With this secure anchor the pseudobulbs hang down from the base of the roots extending along the trees branches and trunk to maximise the amount of sunlight it receives.

Due to its sheer enormous size the plant is not one for home cultivation as it can grow easily to a weight over 500 lbs and 18ft in diameter requiring a lot of space, time and effort for cultivation.  The largest giant orchid on record shown at the 1851 exhibition in Crystal Palace in London where it weighed in at over a gargantuan 2 tonnes. The orchid can have numerous raceme growing up to 3ms from the psydobulb which each can produce around 80 flowers which have a 10cm diameter making the orchid potentially huge. When cultivated in greenhouses and artificial environments the orchids struggle to bloom as they require vast amounts of sunlight and consistent warm temperatures with well-fertilised soils. 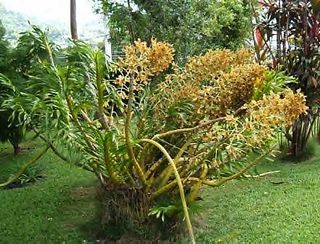 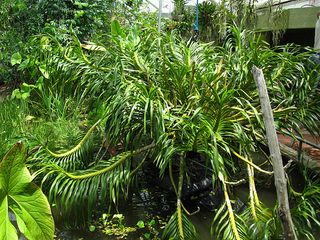 The dodder vine stalks its victims by smell