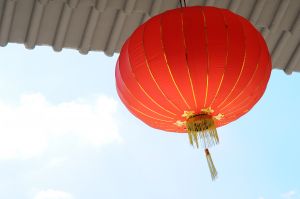 The seventh day of the seventh lunar month is ‘Qixi’ – in Chinese, the ‘Night of Sevens’, also known as the Magpie Festival. This year, that date will fall on August the 23rd.

Qixi has been referred to as the ‘Chinese Valentine’s Day in order to give Westerners a handle on the romantic significance of the date. But really this is a misnomer for a festival which, though many of its traditions do bespeak a rather archaic sensibility, carries none of the crassness and hype which has come to characterise St Valentine’s Day.

At the heart of Qixi is a touching myth. The story goes that Niulang, a cowherd, was cast out from his home and set off to journey with his aged ox – and ox who, unknown to him, was a former god who had been given a bovine form in punishment.

Niulang’s ox led him to a lake where fairies from heaven descended to bathe. One of these fairies was the weaver girl, Zhinu, who had fled from heaven to visit life on earth.

Zhinu and Niulang fell deeply, eternally in love. They married soon after, and they had a son and a daughter. Their married life was long and contented. And yet, the Jade Empress, ruler of heaven, was displeased. When she discovered that Zhinu had married a mortal man, her punishment was swift, and she demanded that Zhinu return to live in heaven.

Niulang was devastated. He stood on the cold soil of earth, and gazed into the unreachable distance where his love now lived.

And then Niulang’s ox, the disgraced god, spoke to him. “Kill me and take my hide,” said the beast, “And make from it a pair of shoes. With these upon your feet, you may walk into heaven.”

Niulang made the shoes, and taking his son and daughter in baskets on his shoulders, he walked up to heaven to be with his beloved. But the Jade Empress was not to be so denied. She took a wickedly sharp hairpin, and she scratched a river into the heavens which Niulang could not cross. The river, shining phosphorescent in the night sky, is the Milky Way.

And on one side of it sits Niulang, and on the other Zhinu – or, as we see them, the stars Altair and Vega.

But this story does not end in tragedy. For the magpies of the world took pity upon the starry lovers. So once a year, on Qixi, the magpies flock together to form a bridge across the Milky Way – and for that one night every year, Zhinu and Niulang may cross the bridge, and be together.

This is the story of Niulang and Zhinu, and the story of Qixi. It is said that if it rains on the night of Qixi, it is tears raining down from heaven to reflect the tears that Zhinu cried when she was separated from Niulang. The day is a festival for romance and marriage, on which traditionally young women would pray for a good husband, and married women for pregnancy. Perhaps it is because of this arch-traditionalism that the festival is falling from the public awareness, with young lovers far more likely to celebrate the gaudy Western Valentine’s Day than its Chinese quasi-equivalent.

But this shouldn’t diminish from the elegance of the myth behind Qixi; a simple tale of star-crossed lovers of the sort which is found across mythology and literature from the tale of Hercules (who was likewise responsible for the birth of the Milky Way), to Romeo and Juliet.

And of course we at Clare Florist are on hand should anybody feel that the festival of Qixi merits a gentle reminder of their affection to a loved one. From traditional Chinese flowers such as chrysanthemums and orchids, to more Western symbols of romance like the single red rose, our range of romantic flowers can be used to say “I love you” with taste and decorum. Just be wary of falling in love with a fairy – your ox won’t thank you for it.

The Flower Photography of Jonathan Singer