Do Androids Dream of Electric Flowers?

Deep Dream is a weird and exciting new image-processing algorithm from Google. Images are fed through the program which then attempts to identify and emphasise details which it interprets as being familiar, based on an initial bank of images that were loaded into Deep Dream at the outset. A new image is created and the whole process is repeated until images of normal things begin to get transmogrified into images which could be described variously as startling, nightmarish, psychedelich or surreal. Pacific Standard magazine describes the resultant images as looking as if "a computer took acid and stared at itself in the mirror too long."

The original set of images fed into the algorithm seem to have featured animals in abundance, particularly dogs, as canine heads can be observed sprouting up everywhere in images given the Deep Dream treatment. One thing is for certain; the visual feedback loop employed by Deep Dream has created some truly interesting images whilst also opening up new possibilities of research into neural networks.

As soon as we found out about this we were desperate to feed an image through the algorithm. We haven't quite mastered the python programming language yet yet so we resorted to using an online Deep Dream image generator which took a week to process. We uploaded an image of Clare Florist's Champagne Fizz bouquet and sat back patiently to await the results. Anticipation began to mount and the excitement was palpapable when we revisited the site to download the result this morning: 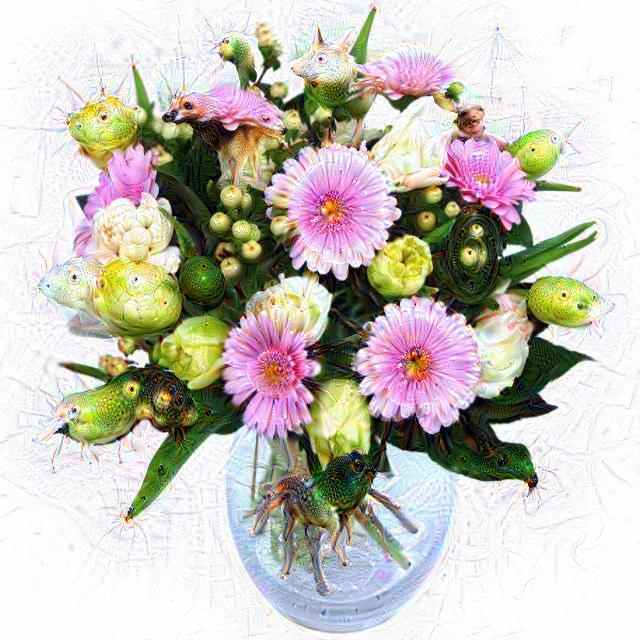 A recurring motif of the Deep Dream algorithm is animal heads emerging unexpectedly, a theme which is strongly evident here in the greenery of the bouquet. A mixture of birds, fish and other strange amphibian lifeforms seem to be coming to life amidst the flowers of the bouquet. Towards the top there is even what looks to be foxes or ferrets, a pair of which are conjoined below what looks to be some kind of budgerigar.

Very cool stuff, perhaps this is what a bouquet of flowers might look like to someone under the influence of some kind of hallucinogen? We can't venture to say right now; that's an experiment for another blog post!

Biophilia - Why We Feel Connected to Flowers