Based in France in the 19th century, Gustave Caillebotte belonged to the impressionistic school of painting, although his style veered more towards realism when compared to other artists active in this group. Like many painters of his era, Caillebotte was responsible for many works of art which were influenced by nature, whether it was beautifully rendered landscapes or still lifes involving floral arrangements. 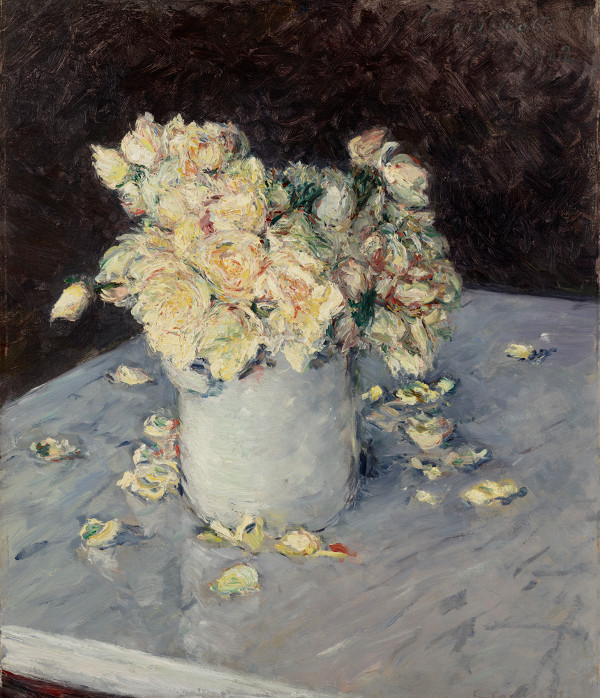 Painted in 1882, Yellow Roses in a Vase is one of Caillebotte's finest artworks and is widely recognised around the world. This piece depicts a vase filled with yellow roses placed upon a white tabletop with a contrasting dark background helping the vase and table achieve more visual prominence. The painting showcases Caillebotte's characteristic brushwork - one can almost feel the texture of the paint just by observing it. Roses seem to have been of particular inspiration to the French artist as he revisiting this visual motif in the painting Rose Bush in Flower two years later.

Art critics and historians have noted that, whilst associating himself with impressionism, Caillebotte's style drew on many different influences which are afforded different weight within different pieces. He seems to have maintained an experimental approach to his craft, trying out different things:

"At times, he seems very much in the Degas camp of rich-colored realism (especially his interior scenes) and at other times, he shares the Impressionists' commitment to "optical truth" and employs an impressionistic pastel-softness and loose brush strokes most similar to Renoir and Pissaro, though with a less vibrant palette."

It's not surprising that so many classical painters were inspired by the inherent natural beauty of flowers. Whilst contemporary art often becomes caught up in abstract ideas or surreal concepts, classic art was often concerned with the portrayal and representation of sheer beauty. It isn't to necessarily say one style is preferrable, each has its own merits and each style is reflective of the society and era it is borne out of.

A Guide to Spring Flowers

Treat Your Mum This Mothers Day with Flowers