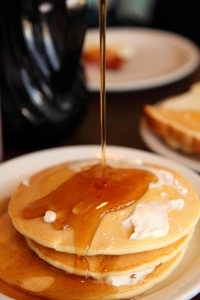 Okay, yes, it's a little off-topic ... but who minds going off topic when the new topic is pancakes?

Pancake day occurs on Shrove Tuesday, traditionally the day before Lent begins in the Christian calendar. In this respect it's perhaps an unusual example of a secular tradition -- eating pancakes -- coming to be the popular face of a Christian celebration, whereas many other celebrations -- Christmas and Easter -- were originally Pagan, but came to be regarded as Christian (even if chocolate eggs and Santa Claus do seem to feature rather more heavily than the resurrection and the nativity these days).

Another big celebration which occurs on Shrove Tuesday is Mardi Gras, or 'Fat Tuesday'. The best known Mardi Gras worldwide is probably in New Orleans, Louisiana, USA, where jazz fans, jazz bands and partygoers dressed in feathers descend on the city for a huge party.

'Fat Tuesday' actually has the same origin as the tradition of eating pancakes -- the need to use up rich and fatty foods before fasting for forty days for Lent. You can imagine how good those pancakes would taste if you were going to "refrain from food which gave pleasure" for over a month afterwards!

Speaking only for myself, I certainly don't think I'd have the willpower to live on such a Spartan diet for forty days ... would you? But  whether you're fasting for Lent or not, you should certainly take this excuse to cook up a tasty batch of golden pancakes, dripping with lemon and sugar. Mmmm....

'Just Because' Day... Celebrate with Flowers

RHS Plant and Design show to launch in London