How the Monkey Puzzle got its name 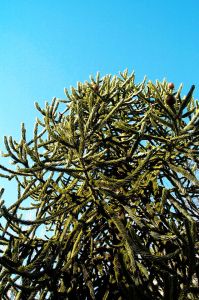 Have you ever seen a monkey puzzle tree?

Auracaria Aurucana has long been called the monkey puzzle tree, and is so associated with "puzzles" now that one of the UK's leading crossword-setters has taken "Auracaria" as a pseudonym.

But why does this funny-looking, spiky tree have such a silly name?

Well, the story goes: in the seventeenth century, there was a great fashion among the wealthy for importing exotic plants into their gardens from abroad. One such horticulturalist, at Pencarrow in Cornwall, acquired an auracaria. And, looking upon its spiky leaves, with their sharp barbs and twisting curls, he remarked:

"It would puzzle a monkey to climb that!"

And the name stuck. But what is possibly even better is the French version of the same name: they call it desespoir des singes -- meaning "Monkey's Despair".