Read about the flowers that have been hanging around since the age of the dinosaurs!

This little green herb (pictured below) may not look like much compared to some of the bright and colourful orchids and roses which have featured on the Clare Florist blog in the past, but they do have one thing going for them -- they've been hanging around for 130 MILLION years.

To put that in perspective, 130 Million Years Ago (or MYA) is the early Cretaceous period -- if you count back from now until the catastophic event which ended the age of the dinosaurs, you then have to count back that far AGAIN to reach the time when these plants, called Amborella, first diversified. 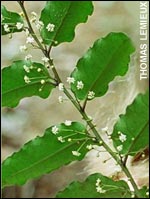 They have been seen as a Darwinian "missing link", which can help to provide information on how early plantlife -- such as gingko trees, pines and cycads -- and the incredibly diverse types of flowering plants which decorate the planet today (not to mention filling our delightful Clare Florist bouquets!)

Darwin himself was very interested in the appearance of flowering plants, calling it "the abominable mystery". So when the Amborella was first discoered in South Pacific rainforests, it was a moment of great excitement for biologists and flower lovers. Professor Ned Friedman was instrumental in the study which brought these plants to global attention in 2006:

“One of the biggest challenges for evolutionary biologists is understanding how these flowering plants arose on Earth,” said Prof Friedman.

“The study shows that the structure that houses the egg in Amborella is different from every other flowering plant known, and may be the potential missing link between flowering plants and their progenitors.”

It's very exciting that plants like this still populate the planet's surface, giving us a living window into the distant past -- and even helping us to understand how come flowers exist at all!