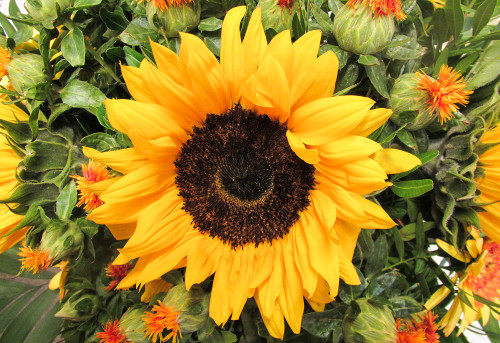 Friday the 1st of May 2015 marks National Flower Arranging Day, a celebration of the artistry involved in creating beautiful bouquets and baskets which is something we happen to know a thing or two about here at Clare Florist, if we do say so ourselves.

This year, the National Association of Flower Arrangement Societies is planning an extra special event to spread awareness of the day. NAFAS are planning to distribute over 60,000 bouquets across the country with endorsement from celebrities including Alan Titchmarsh, Jamie Oliver and Lulu.

Dubbed the "Lonely Bouquet," the campaign sees the charity asking its 60,000 members to leave a bouquet in public for an unwitting stranger to stumble across. The Lonely Bouquet was a huge success in 2014 so it makes sense to repeat the even again this year.

The Lonely Bouquet was the concept of a Belgian florist by the name of Emily Avenso who came up with the idea in a blog post which went viral. Lonely Bouquets have been an international phenomenon ever since, helping to spread joy across the county via anonymous acts of floral kindness.

The 2014 campaign was met with overwhelmingly positive responses including a woman facing breast cancer treatment finding a pink floral arrangement which gave her strength as well as a man who amazingly came across an arrangement of 36 flowers which he was able to present to his wife on their 36th wedding anniversary.

There's nothing quite like receiving a bouquet of flowers; especially if they are unexpected. The surprise factor adds a further element of joy and excitment to the feeling of getting a fresh, colourful bouquet of blooms.

You can find out more information about this fantastic event on the NAFAS website.

Why Orchids Have Lips-Shaped Petals