Our florists love making bouquets and arrangements for UK flower delivery, and we can send flowers to Derbyshire for you. We have a wide range of Roses, Freesia flower bouquets, and Lilies, as well as Classic Bouquets and our Colourful flower Bouquets, and our range of Flowers under £21.00. Our home page provides more information on our extensive range of next-day flower delivery services, all of which are available for next day UK flower delivery to Derbyshire, Or indeed anywhere in the UK! When you're thinking of a gift to give on birthdays, anniversaries, Mother's Day, Valentine's Day and other occasions, why not send flowers to Derbyshire? Through us, you can choose from a variety of bouquets to those close to your heart. We also offer next-day delivery service in case you want your blooms to arrive right on schedule. So if you want flowers delivered on special occasions, make sure to order flowers for delivery to Derbyshire. Best of all, our seven day freshness guarantee means you can rest assured knowing your special someone will enjoy their flowers for days after delivery.

Most popular flowers sent to Derbyshire this month 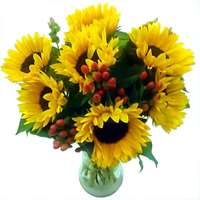 It doesn't matter if you visit for a family day out, a short break or a long holiday, Derbyshire is a great place to come to thanks to a variety of scenery as well as a wide array of things to do and places to visit. A substantial portion of the Peak District National Park lies within Derbyshire.

Derbyshire was first visited by humans 200,000 years ago during the Aveley interglacial. Evidence of this can be traced to a Middle Paleolithic Acheulian hand axe found near Hopton.

Further occupation happened during the Upper Paleolithic and Neolithic periods of the Stone Age when Mesolithic hunder gatherers roamed the hilly tundra. Evidence of these tribes being in the area can be traced to the limestone caves located on the Nottinghamshire border. There are also burial mounds of Neolithic settlers scattered throughout the county.

Real signs of agriculture and settlement were first recorded in the Bronze Age. Signs of clearance, arable fields and hut circles were discovered after archaeological investigation in the moors of the Peak District.

The lead ore in the limestone hills of the area were the main reason invaders were attracted to Derbyshire during the Roman invasion. The Romans settled throughout the county and built forts near Brough in the Hope Valley and near Glossop. They also settled around Buxton, which is known for its warm springs. They also set up a fort near modern-day Derby in what is now known as Little Chester.

A number of kings of Mercia were also buried in the Repton area.

After the Norman Conquest, most parts of the county were subjected to the forest laws. The Forest of High Peak to the northwest was put under the custodianship of William Peverel and his descendants. The rest of the county was bestowed to Henry de Ferrers, and part of it became Duffield Frith.

Calke Abbey Garden – Calke Abbey is the story of the dramatic decline of a country house estate. Here, you can discover the tales of an eccentric family who gathered a vast collection of hidden treasures. A highlight is the beautiful walled gardens which is a site for flowers in Derbyshire. Also worth exploring are the orangery, auricula theatre and the kitchen gardens.

Cascades Gardens – This is a fascinating garden to visit in Derbyshire as its filled with formal perennial beds, water gardens, a winter garden and vegetable patch. Going to the cliff top also offers spectacular views.

Chatsworth Garden – This garden covers 105 acres and has evolved for more than 450 years. The garden includes famous waterworks including the 300 year old Cascade, the trough waterfall and the gravity-fed Emperor fountain. The garden also has several Derbyshire flowers present in the rose, cottage and kitchen gardens.

Haddon Hall Garden – Haddon Hall is an English country house that is an absolute gem. The exterior walls of the house are adorned with climbing roses. The house also boasts of a beautiful terraced garden.

Lea Gardens – This is a woodland garden that specialises in rhododendrons, azaleas and kalmias.

Renishaw Hall Garden – Features an Italianate garden that was laid out by Sir George Sitwell.

A 2002 campaign by Plantlife called upon members of the public to nominate the native wildflower they felt best represented their county. As a result of this, Derbyshire has since been paired with the Jacob's Ladder, also known by its scientific name, 'Polemonium caeruleum.'

Derbyshire is also a great place to come for a romantic trip. Thanks to an abundance of parks and gardens, you have lots of choices when it comes to taking a romantic stroll. You can start of the trip right when you send flowers to Derbyshire, go out for a meal then head out to the many attractions in the county.

Our flowers delivery services in Derbyshire are usually made by DPD or Royal Mail Special Delivery. 99.9% of our flowers are delivered by 5pm on the requested day - (more commonly before noon), except UK Public Holidays. We also offer a range of next-day flower delivery options in Derbyshire - specific information is available during checkout.

We also deliver flowers to these locations in Derbyshire

There is no small print! When you order flowers for delivery in Derbyshire with Clare Florist, that's exactly what you get - flowers delivered in Derbyshire, without any fuss.