Our florists love making bouquets and arrangements for UK flower delivery, and we can send flowers to East Sussex for you. We have a wide range of Roses, Freesia flower bouquets, and Lilies, as well as Classic Bouquets and our Colourful flower Bouquets, and our range of Flowers under £21.00. Our home page provides more information on our extensive range of next-day flower delivery services, all of which are available for next day UK flower delivery to East Sussex, Or indeed anywhere in the UK! When you're thinking of a gift to give on birthdays, anniversaries, Mother's Day, Valentine's Day and other occasions, why not send flowers to East Sussex? Through us, you can choose from a variety of bouquets to those close to your heart. We also offer next-day delivery service in case you want your blooms to arrive right on schedule. So if you want flowers delivered on special occasions, make sure to order flowers for delivery to East Sussex. Best of all, our seven day freshness guarantee means you can rest assured knowing your special someone will enjoy their flowers for days after delivery.

Most popular flowers sent to East Sussex this month 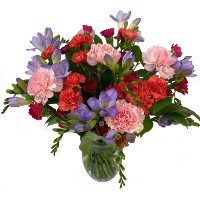 East Sussex is a county in South East England that forms part of Sussex, a place that played a major role in the Roman Britain era. In 1066, the Normans landed in East Sussex and fought with Harold’s army in a field close to Battle, after which an abbey was built by the Normans and was aptly named Battle Abbey. Several other county churches were built during this time, while numerous castles, including Lewes Castle and Bodiam Castle, were built during the middle ages.

Like most places in the UK, some historical structures in East Sussex are well preserved, and serve as tourist attractions. Surrounded with all sorts of East Sussex flowers, the buildings are great sights to behold.

One very interesting feature of East Sussex is the rocks that lay under it, which is around 150 million years old. They’re pretty much Jurassic to Cretaceous in age. This makes East Sussex a geology haven, what with other pre-historic discoveries made over the years, including dinosaur footprints.

Pieces and traces of history, however, aren’t the only things that make East Sussex a must-visit. Every city and town has something wonderful to offer, which makes a short stop or a long holiday really worth it.

Wondering where to go when in East Sussex? There are plenty of places that you can check out, some offering more to tourist than others.

Seaford is a quaint, pleasant seaside town that is home to a very famous natural attraction, the Seven Sisters cliff. Seen from afar, it would look like something cut out of a post card. The breathtaking view of the cliffs is further enhanced with all the flowers in East Sussex found here and there.

Crowbourough is a hilltop town in the Ashdown Forest. It is more famous in the fact that it’s the home of Sir Arthur Conan Doyle.

Harfield is a place that you might be familiar with, not for being an Ashdown village, but because of its very famous resident, Pooh Bear. If you don’t know Sir Arthur Conan Doyle, surely you know Pooh Bear.

These are just a few examples of the picturesque cities and towns in East Sussex. If you’re planning to send flowers to someone in East Sussex, you’ll have to do more digging.

Places of historical interest - As already mentioned, the history of East Sussex goes as far back as the pre-historic times, but you might be able to appreciate it more by visiting historic attractions.

Battle Abbey and the famous battlefield of 1066 - See where all the action happened when the Normans fought Harold’s army. With a touch of your imagination, transport yourself in time and be in the midst of it all.

Bodiam Castle - This is one of the most famous castles in Great Britain, which was built in1385. It’s a picture of an imposing fortress made to protect its occupants. It might have failed to protect itself, but some of the interior did manage to survive.

Herstmonceux Castle - What is one of the things that history is likely to leave behind? Ghosts. Despite being a romantic moated castle, complete with a parkland and Elizabethan walled garden filled with East Sussex flowers, Herstmonceux Castle is a favourite place for ghost sightings.

Other historical attractions include the Pevensey Castle, Newhaven Fort and Anne of Cleve’s House.

A visit to East Sussex won’t be complete, if you don’t indulge in various activities that the place is famous for — walking and cycling. Your itinerary should include either a short-distance or long distance trail, depending on your appetite for fun and adventure. The choice would also depend on how physically fit you are to take on a more rigorous and taxing trail. Whichever is the case, a short or long trail will give you a glimpse of the natural wonders of the place, including vibrant flowers in East Sussex.

Our flowers delivery services in East Sussex are usually made by DPD or Royal Mail Special Delivery. 99.9% of our flowers are delivered by 5pm on the requested day - (more commonly before noon), except UK Public Holidays. We also offer a range of next-day flower delivery options in East Sussex - specific information is available during checkout.

We also deliver flowers to these locations in East Sussex

There is no small print! When you order flowers for delivery in East Sussex with Clare Florist, that's exactly what you get - flowers delivered in East Sussex, without any fuss.