Following on from last weeks Venus flytrap post, we shall stick with the theme of carnivorous plants as they are awesome. This week we shall look at bladderworts also known as Utricularia, a form of carnivorous plant that has a unique mechanism for obtaining its precious nutrients. 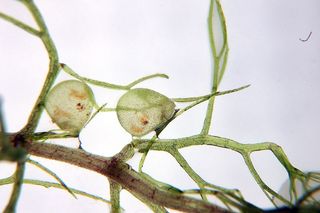 Utricularia can be found almost anywhere there is fresh water for some portion of the year with the a few exceptions of Antarctica and some oceanic islands with them being primarily found in South America and Australia. Like with the Venus flytrap, the Utricularia grows in nutrient deficient soils meaning their carnivorous nature gives them a competitive advantage over other plant species in the area. These plants are highly adaptable in surviving seasonal changes in there environments, some have evolved winter dormancy periods in cold climates, whilst others require no such dormancy if the temperature is steady all year round. In Australia, many species grow only during the wet season and reduce themselves in size to wait out the dry season. The adaptability of these plants is fascinating but even more so is how they go about capturing their prey.

Utricularia use a vacuum-driven mechanism for capturing their prey. By pumping charged particles across their cell membranes they can force water to move outside of their bladder. This movement of water creates a vacuum inside the seadled baldder which causes the walls of the bladder to flex inwards slightly. This inward flex is under tension, which, when released will suck in air or water to fill the vacuum drawing in what ever prey is nearby. Around the hinged trapdoor of the bladder are a series of trigger hairs, tiny levers that open the trap door when touched causing a suction effect and the capture of what ever is hovering around nearby. Once inside the bladder, digestive juices are released which dissolve the prey and allow the plant to take up those vital nutrients. Whilst this occurs water is pumped back out of the bladder to reset the trap which also helps to concentrate the contents of the bladder and allow for quicker absorption. Within as little as 15-30 minutes the trap can be reset to allow for the next capture of prey.

Our date to Celebrate