Plants and flowers attract various birds and animals through displaying bright colours, attractive scents with much research having been conducted into the mechanisms that plants have evolved to increase their pollination success. Now researchers from Bristol’s school of biological science have found that leaf shape can also play an important role in attracting nectar-feeding bats. 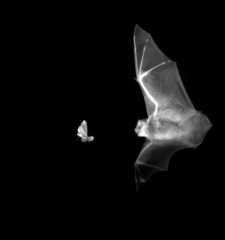 The plant that researchers studied was Marcgravia evenia, a vine found in the Cuban rain forest that has evolved a concave shaped leaf to attract the bats through producing unique echo-acoustic signals when hit by the bats sonar. The unique shape reflects back a loud and constant signature to the bats from different angles which resulted in the bats finding the plants twice as fast than without the leaf.

To determine whether echolocation attracted bats more quickly, researchers trained the bats in the laboratory to look for the feeder amongst artificial foliage with a mixture of special shaped leaves and other types of leaf. The feeder was then placed at one of 64 locations within the foliage and the times recorded from when the bat was released to when it landed on the feeder. They discovered that bats located the feeder in half the time when it was attached to one of the special leaves than when it wasn’t. 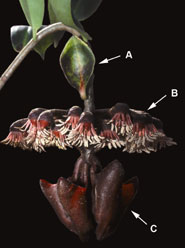 Flowering inflorescence of Marcgravia evenia. (A) dish-shaped leaf, (B) ring of flowers most of them in the male phase with anthers shedding pollen, (C) cup-like nectaries.
Image by Ralph Mangelsdorff

“For the plants, it increases the success of pollination,” Dr. Simon said. “For the bats, it’s good because it helps them find the flowers faster — they have to make several hundred visits to flowers every night.”

Since there are several hundred different species of plants in the Cuban rainforest that rely on about 40 different nectar feeding bat species for pollination the researchers except to find more plants have similarly evolved to special shaped leaves to attract the bats more readily.

Tips for Tuesday – Where to place your flowers