When I think of farmers growing plants, food or produce, I generally picture a stereotypical gruff burley fellow working the land with giant machinery turning the soil, fertilising the land and harvesting the crop. None of this happens with out him getting his hands dirty. How surprised was I to discover early on a Monday morning that there is a technique for growing plants and produce that requires no soil what so ever, just minerals and nutrients mixed into a water solution. Its called hydroponics.

Hydroponics is a technique for growing plants and produce in a soilless culture meaning the plants are held with their roots suspended in the nutrient solution or anchored in an inert medium like clay or gravel. The earliest recorded uses of growing terrestrial plants without soil was recorded in 1627 and the technique has been experimented with ever since. Research discovered that plant growth happens with or without soil. Removing the plant from the soil is fine; as long as it is supplied with the right balance of nutrients the plant will continue to grow as it would in the soil. The technique found favour in the early 1930s where it had one of its first commercial success stories A small rocky atoll in the Pacific Ocean called Wake Island which was a refuelling post for Pan Am Airlines utilised hydroponics on the island to grow vegetables on the island for the passenger due to the expensive cost of airlifting in fresh vegetables it was the perfect solution. A more interesting use however is how this technique is being used be NASA as a possible way of creating a self supporting life support system CELSS for use in space stations and colonies due to its many advantages. 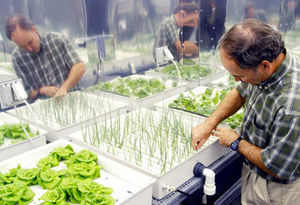 The main advantages of hydroponics for future food production are:

The main disadvantages are that since there is no soil to act as a nutrient reserve any failures in the hydroponics system leads to rapid death. Other disadvantages include potential damp damage and fungus attacks from the high moisture levels. Limitations on growth however can occur due to a lack of CO2 and light, which can be overcome through releasing extra CO2 into a controlled environment and adding more lights.