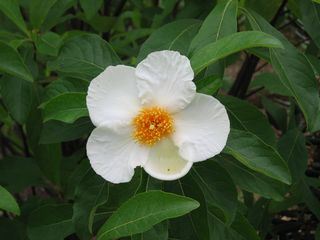 The Franklin tree (Franklinia alatamaha) is all alone. Part of the tea family of plants it is the only species know in its genus and is a incredibly rare flowering plant that has been extinct in the wild since the 19th century. Discovered by the Philadelphia botanists John and William Bartram in 1765 it was found only to grow in an area two to three acres in size near Fort Barrington along the Altamaha River with the last ever sighting occurring in 1803.  After several years of studying the flower Bartram classified it as a new genus Franklinia and named it after Bartrams fathers close friend, Benjamin Franklin.  Fortunately the Bartrams bought back some of its seeds to Philadelphia and cultivated the plant saving it from extinction. Its honeysuckle like fragrant white flowers and stunning red leaves in the autumn make this a popular ornamental plant. 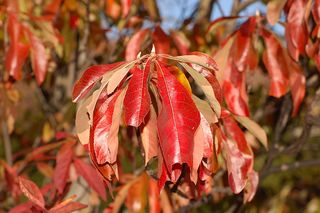 Crazy Flower Facts for May