The dodder vine stalks its victims by smell

With Halloween just over a week away what better way to prepare us than taking a look at a family of real life horror plants known as Cuscuta (Dodder). The dodder which has names such as devil's guts, devil's hair, devil's ringlet, goldthread, hailweed, hairweed, hellbine, love vine, pull-down, strangleweed, angel hair, and witch's hair (see the Halloween theme) are a family of thin parasitic vines which are found in temperate to tropical climates across the world. 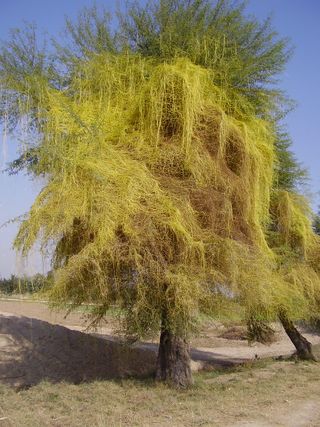 What makes this plant rather scary is that unlike most parasitic plants which grow because they have landed on a particular plant or tree, the dodder actively seeks out its host by following the scents they release. The plant starts out as a tiny tendril with now roots and leaves and has around a week to find a host to attach itself to our it dies. The way it finds its host is through detecting the smells of nearby plants/vegetables and foliage and shows preference to when given a choice. In one experiment where the dodder had a choice between a tomato and some wheat the vine always went for the tomato. 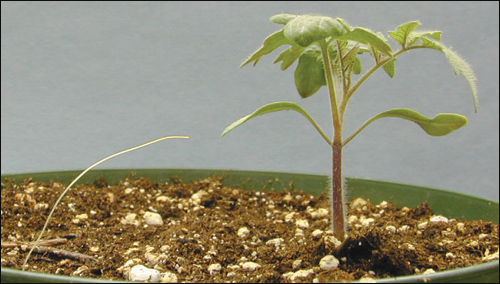 Once the vine attaches itself to the host it begins to wrap itself around the stem. If the host contains nutrients and food that will be beneficial to the dodder it produces haustorium, an appendage much like a root, which buries itself into the hosts tissue and draws out the nutrients from within. The original root then dies away leaving the plant to grow and attach it self to multiple plants, which in tropical climates spreads and grows nearly continuously.