Weird and wonderful Wednesday – Glow in the dark fungi

Since were getting ever closer to Halloween with its ghosts, ghouls, and witches, and all things paranormal and possessed, our weird and wonderful Wednesday blog will look at natures own spirits of the night. With names like the Jack O’Lantern mushroom and the ghost fungus these fungi all have one thing in common, they can all glow in the dark. 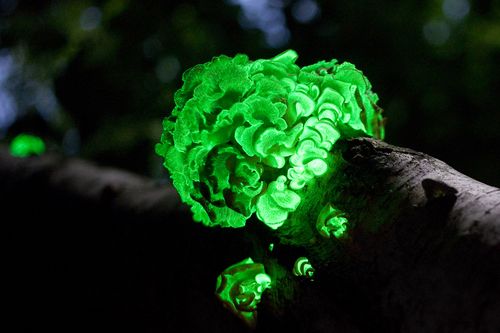 This magnificent property stems from one simple biological characteristic. Like many fish, arthropods and marine invertebrates these fungi contain a chemical reaction which produces light as a by-product. Within each of the fungi are two chemicals, a pigment and an enzyme; the pigment reacts with oxygen to create light with the enzyme acting as a catalyst helping to speed up the reaction. With over 1.5 million species of fungus on earth, only 71 of these display this property and even fewer have affect more than a small portion of the cap.

The ghost fungus (Omphalotus nidiformis) found in southern Australia and the Mycena from south America both display this property very strongly and are parasites found feeding and growing on dying, dead or rotting trees on the forest floor. The ghost fungus has a cap that ranges in colour with tints of orange, brow, grey and even black and a white gills while the Mycena are far smaller, no larger than a few centimetres tall. Both these fungi in low lighting conditions and at night can be seen to glow from top to bottom with the gills having the strongest luminescence and look spectacular

Most other bioluminescent fungi have similar properties to the ghost fungus honey mushroom, panellus stipticus and Mycena are all found in dead and rotting trees. But beware, if you ever find these mushrooms in the wild I would strongly advise you not to eat them, read your book by them, bask in their eerie glow and admire nature at work as if you eat them you will become seriously ill within around 30mins as the chemical which is responsible for the luminescence is toxic when ingested.