As we get closer to Christmas (only 40 days now) we will be taking a look at all those different types of foliage we associate with Christmas, from poinsettia to Christmas trees each one is stooped in symbolism and tradition that is really quite interesting. Today we will look at Christmas holly. 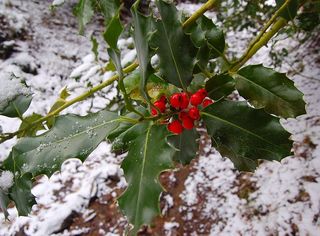 Christmas holly has to be one of those Christmas symbols that no mater what time of year it is, the thoughts of frosty mornings, mulled wine and roasted chestnuts begin to creep into the back of the mind and make us start to think of the Christmas season. When Christmas first came to northern Europe holly originally was believed to have magical powers due to it always remaining green. With the ghouls and ghost being able to be heard in the howling winds of the winter month’s holly was placed over the doorways of homes to drive away evil spirits.

Holly also has its religious symbolism too with it in Scandinavia being known as the Christ Thorn, where legend has it that holly grew out of the footsteps of Christ as he walked the earth. Further religious symbolism came be found in the prickly leaves representing the crown of thorns Jesus wore when he was crucified and the red berries the blood that was spilt. 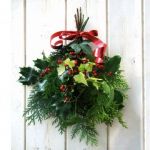 The final piece of holly related history is from pagan times when holly and ivy where meant to be male and female plants respectively. An old tradition says that whichever one was brought into the house on Christmas Eve first tells you whether the man or woman of the house would rule for the next year, bringing it inside any early was considered bad luck.

Good Luck to Everyone Getting Their A-level Results!

Fill Your Home with the Fragrance of Fresh Freesia