Now were into November and there is just under seven weeks left till Christmas, I think its perfectly acceptable to start talking about Christmas flowers and what better way to begin than with the UKs best selling Christmas Flower, Euphorbia pulcherrima.  The Christmas Flower, also know as the Christmas Star, poinsettia, noche buena or Atakurks Flowers is one that epitomises the Christmas feel, with its lush red bracts and deep green leaves it has all the colours associated with any bouquet you’ll see from any florist this Christmas period. 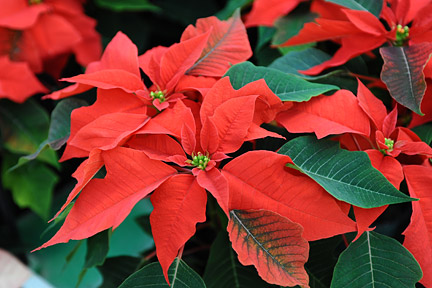 The poinsettia takes its name from Joel Roberts Poinsett, the first United States ambassador to Mexico, who in 1825, introduced the flower into the US. It is native to Mexico and is found in deciduous forests at moderate elevations along the entire Pacific coast. Outside of its natural habitat poinsettia is generally cultivated across the world as an indoor plant and particularly at Christmas due to its bright festive colours.

This plants association with Christmas began in 16th century Mexico where the tale begins with a young girl is to poor to provide a gift for Jesus’ birthday. She is inspired by an angel to collect weeds from the roadside and place them at the church alter inside. Upon doing so the crimson blossoms sprouted from the weeds and became beautiful poinsettias. From the 17th century the plants have been included in Christmas celebrations as the star shaped lead pattern represents the Star of Bethlehem whilst the dark red was meant to symbolise the blood of Christ.

The poinsettia can be categorised as a small tree or shrub growing on average to between 1 to 4m’s in height. The bright red leaves many people would assume are the petals of the flower but that isn’t correct, as the flowers are small yellow structures found at the centre of the plants leaf bunches. An interesting fact about the red bracts is that they come from photoperiodism, the effects on a plant depending on the amount of time it spends in the day and night. For the colours to reach the deep reds associated with christmas, the plant must spend at leasnt 12 hours a day, for 5 days in a row in the dark, whilst during the day in bright sunlight.

The Weird and Wonderful - Parrot’s Beak

Size matters even in plants