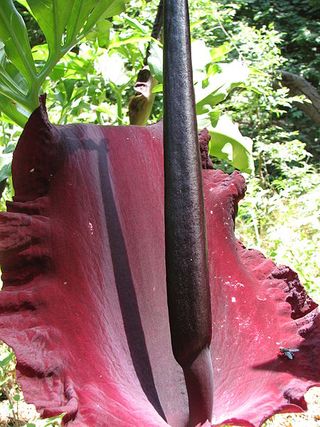 There’s an occasional tendency for our “Weird and Wonderful Wednesdays” posts to take a turn for the macabre…and even the murderous. In the past we’ve featured plants that kill, and plants that devour living prey!

So it’s rather a relief (us being gentle and mild-mannered folk) to be able to turn to Dracunulus Vulgaris, a far nicer sort of plant. Just like a corpse flower, the “Little Dragon” attracts hordes of flies with a foul smell, before trapping them with an ‘inflorescent glow’. However, the kind Little Dragon only holds on to its visitors overnight – and then sets them free, laden with its pollen, to carry on and pollinate other Dracunulus. Once pollination is complete, the smell is shut off completely – most considerate.

Apart from its Latin name, this flower also goes by many others: dragon arum, dragonwort, wake robin, dragon’s tongue…and even Viagra lily. Clare Florist would like to make it clear that to the best of our knowledge, this funny-smelling plant has no positive effects in the bedroom.

Another bizarre story attached to D. Vulgaris is that it can be used to repel snakes…! Carrying the roots or leaves of this plant was thought, in days of yore, to keep you safe from serpents. The plant may even have been taken on sea journeys away from its native Balkans, to keep the boats safe from sea serpents.

But for all the strange stories and, eh, dubious names surrounding the Little Dragon, it can’t be denied that it possesses a certain wild beauty. Its dragony names come from the appearance of its spadex and spathe, which can be seen as the mouth and tongue of a dragon, complete with a broad ‘flame’ of rich purple fire. It’s not gently pretty in the manner of a rose or carnation – but it does have an exotic, untamed appeal all of its own. 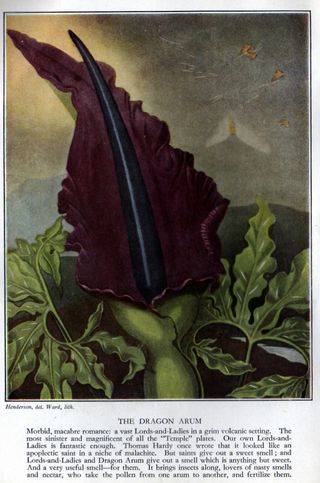 Bringing the theatre out in flowers

Welcome in Autumn with Clare Florist