Lest We Forget - The Poppy

Flowers can be used for expressing many emotions, whether it’s to say I love you, I’m sorry or congratulations, flowers add an extra dimension to the emotions we are trying to express. The poppy is no different, steeped in symbolism from as early as the Romans and the Greeks, the poppy is flower used throughout North America and the commonwealth as a way of remembering the fallen and veterans of WWI and other past and ongoing conflicts. 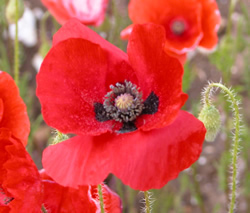 The poppy is mainly cultivated for two different reasons. The first is for its bright colourful flowers of which the petals can be almost any colour making them mainly ornamental plants. The second is as a source of medicinal drugs and food, opium and opioids, poppy seeds and poppy seed oil are all cultivated and used worldwide. 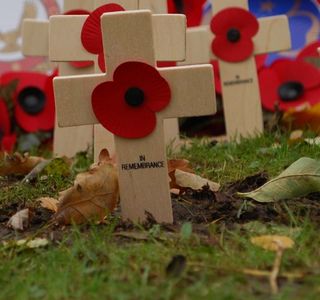 Due to the opium that can be extracted from them and the blood red colour of its petals, the poppy has long been a symbol of sleep and death. In Roman and Greek mythology poppies were used as offerings to the dead and poppy emblems were inscribed onto tombstones to symbolise the eternal sleep of death. The modern day uses of poppies for remembrance stems from the poem In Flanders Fields by Lt. Col. John McCrea a physician serving with the Royal Canadian Medical Core. The corn poppy which is classified as an agricultural weed was prevalent in the heavily disturbed land of no mans land and the trenches and are a prominent focus of McCreas Poem. The vow to wear a red poppy to remember those who have served in war comes from US professor Moina Michael who, inspired by McCreas poem, wrote his own poem called We Shall Keep the Faith and vowed to always wear a poppy as a symbol of remembrance. A tradition that is still upheld very strongly today and since Remembrance Day and Veterans Day both fall in November artificial poppies are used instead of real flowers which do not bloom this late in the year.

Amazing Video Shows the Birth of a Flower