Our weird and wonderful flowers blog each week takes a look at a species or two of flowers that the majority of people would not have any clue even existed. From rare and exotic species to ones which have evolved highly unique mechanisms to increase their chances of survival, each week we bring you a highly unique and interesting plant to help increase your interesting flower knowledge. Today were going to look at two rather different plants each with a unique characteristic in the way that they smell the Dragon Arum with its unique corpse like scent and the Azara micropylla which smells like white chocolate!. 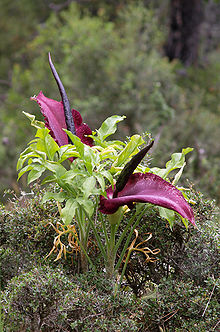 The Dragon Arum, Dracunculus vulgaris, is part of the same family as the world’s smelliest plant the Titan arum, so its no surprise they both smell rancid. With a structure very similar to its cousin, it has a large purple spathe (a specialised leaf which forms a sheath to protect the flower cluster) and a dark coloured spadix that protrudes outwards and is usually covered in small flowers. The plant its self is native to the Balkan region of Europe but has been introduced to the warmer parts of the USA and Puerto Rico. The reason this family of plants smalls like rotting flesh is to attract flies which are there main pollinator. The flies pick up the scent in the air and go looking for a meal only to land on the plant and find nothing of interest but take away some of the pollen which is transferred when the fly’s are tricked again. 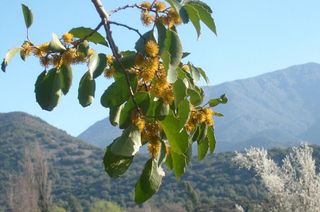 On the contrary to the foul smelling Dragon Arum there is the sweet smelling Azara microphylla, an evergreen shrub from South America. Even though this plant is from the likes of Chile and Argentina its one of the few South American shrubs which is resilient enough to survive in the British weather climate with a hardiness down to around –10oC. It’s a very pretty plant which can grow from 3ft to 20ft depending on the climate and in the spring will flower with strong yellow stamens that do not have any petals. The best thing about this simple shrub through has to be its fragrance. Smelling as strong as the Dragon Arum but with a much sweeter scent, the smell has been described as similar to white chocolate, marzipan and vanilla, much nicer than rotting flesh.