As we all learnt in school, plants acquire their energy from the sun through the process of photosynthesis, taking carbon dioxide and water in, and combining them to make sugars to use and releasing oxygen. A staple of the education system but like most things we learn in school, there is always an exception to the rule and in this case, there is around 3000 species that do not fit the bill, they are non-photosynthetic flowering plants i.e. they don’t need sunlight to survive and can thrive in darkness.

This may seem bizarre at first but the process by which they obtain their food source gives them a huge evolutionary advantaged as they can grow where pretty much any other plant cant, in the densest forests at the base of the largest trees. One non-photosynthetic plant is the ghost plant, Monotropa uniflora, which is part of the ericaceae family which also contains blueberries and cranberries! Its completely white appearance is due to a lack of the protein chlorophyll, which is responsible for photosynthesis and gives plants their green colour. 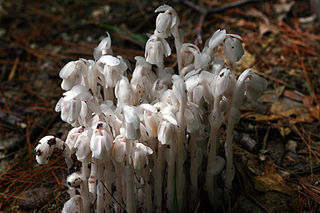 Your probably wondering how these strange looking plants survive. Since all plants get their energy from an outside source these non-photosynthetic plants are no exception as most are parasitic on other organisms. They can be either parasitic directly on a host plant or as is most cases they a parasitic on a fungus which has a symbiotic relationship with the plants root system. In a mycorrhiza, the plants and fungus have a symbiotic relationship in which the fungus gains sugars from the plant whilst in return the plants gain extra nutrients, minerals and water from the fungus as it has a much larger surface area when combined with the root system. The monotropa taps into the fungus and absorbs the sugars it recieves from the plant by fooling it into acting like they are in a symbiotic relationship when it is really being a parasite and taking what it needs without giving it anything back. Since the ghost plant only requires it to be near a photosynthetic plant/tree it can pretty much grow anywhere and the lack of chlorophyll makes it a very unique and interesting looking plant.