In all the bedlam that is the Christmas period we missed a pretty interesting piece of news. Researchers in the Netherlands have discovered the very first flower know to science that does something truly bizarre, it flowers exclusively at night! 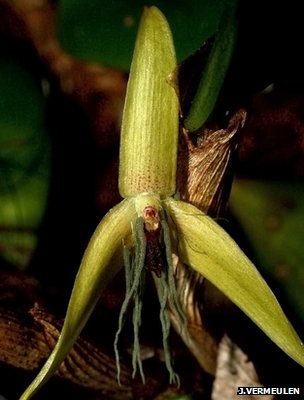 The Bulbophyllum nocturnum orchid was discovered by Ed de Vogel during an expedition to New Britain, an island near Papua New Guinea. Upon taking the specimen back home he found that as the buds reached a size where they would normally bloom he would find the next day they had withered. He soon discovered that the flowers opened for a single night only shortly after sun down and closed and withered just after sunrise.

Even though there are species of orchid that are known to attract nighttime pollinators the B. nocturnum orchid is the first to flower exclusively at night. The reason behind this behaviour remains a mystery until further field studies but one proposed explanation is that the orchid are mimicking fungi with the orchid releasing a scent humans cant detect which attracts flies and other pollinators.

Bizare, but i have to say its not the prettiest of orchids !!

Flowers of the Lunar New Year