The other day we brought you a blog post all about the events of the Chelsea flower show. In that blog we focused on the glamorous side of the event: rock stars, pyramids and stunning flowers. But a few people have had less nice things to say about the show as well, including...some giant bees.

More on the bees in a second. But first, if you think that posh shows like Chelsea are overpriced and out-of-date, you might like this article by John Vidal, where he argues that the show is increasingly irrelevant, and only for the super-rich. On the other hand, a lot of commenters seem to think that we shouldn't bring politics into a show about flowers, and just let Chelsea be Chelsea. What do you think?

Okay, back to the bees. Check out these crazy types! 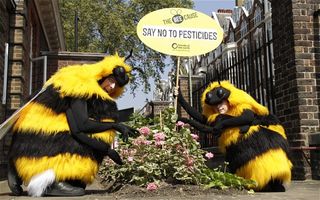 These guys are at Chelsea for a very different reason: they're a publicity stunt by Friends of the Earth, trying to raise awareness of their anti-pesticide campaign. A University of Reading report says that pesticide use is up 6%, which Friends of the Earth say is killing off bee populations.

According to the Telegraph, 'A 2006 study cited found the number of solitary bees have declined by 52 per cent in the last 20 years and bumblebee species in the UK have gone extinct in the last five decades.'

Which means, obviously, that it's giant bee costume time.